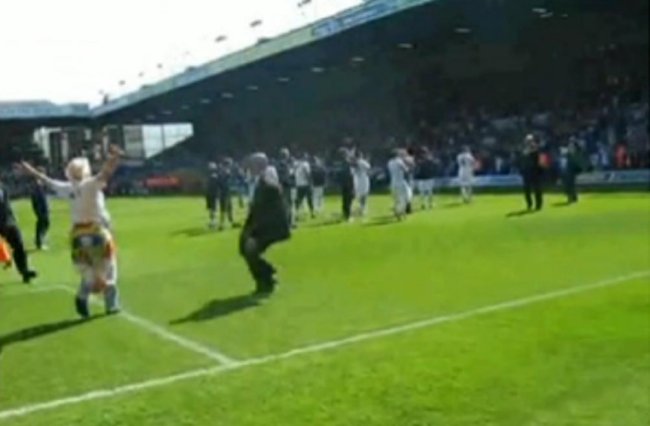 Leeds United have today banned a 63-year old great-grandmother from attending matches at Elland Road for twelve months after she took to the pitch following the club’s final game of the season against Burnley in May.

At the time, Margaret Musgrove (grandmother of 13 sprogs, great-grandmother of three) was handed an automatic ban and had her season ticket seized after stewards hauled 5’4″ pensioner off the pitch and into the stadium’s holding cells – later releasing her without charge.

“It’s not like I am a hooligan. People who do much worse than this get the same ban. A suspension from a few games would have hurt, but I already feel like I have been punished enough.

“I just wanted to shout, ‘Lads, I love you’. I had my Leeds United bag across my chest and a United flag tied around my waste. It was hardly threatening.”

“I’ve followed Leeds for years – I just got carried away. I don’t go out, Leeds United is my social life.”

‘Mags’ has appealed the ban and is seeking compensation from Leeds after paying several hundred pound’s worth of installments towards a 2011/12 season ticket, though the club have basically told her that ‘rules are rules’ – even if you are a rosy-cheeked nanna with biscuits in your pinny and not some thick-eared loon with a spider’s web tattooed across your shaven cranium and a ‘Millwall brick‘ shoved up the sleeve of your bomber jacket.

Basically, she must remember who she’s dealing with here…

Just sacrifice a virgin on the Elland Road steps and you’ll be well away Mags, my dear.