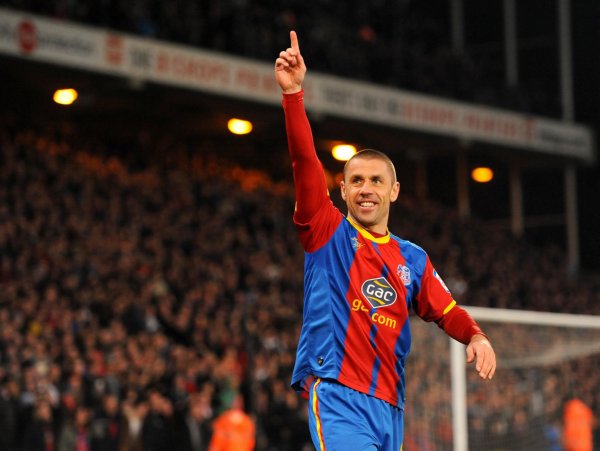 It’s been a while since we’ve done one on Pies, but let’s hear it for Kevin Phillips – the grand old man of the English goal poachers’ union.

While a certain 39-year-old was soaking up the golf applause on his 1,000th career appearance at Old Trafford, another 39-year-old was busy elsewhere banging away a hat-trick last night – with Kevin Phillips scoring thrice (including two goals in the space of two minutes) as Crystal Palace beat Hull City 4-2 to move to within a single point of their play-off rivals in the Championship table.

On loan at Palace from Blackpool, Phillips is now on the cusp of scoring the 250th league goal of his career, with 247 under his belt following his heroics at Selhurst – though his overall total is 283 goals, which makes him the top active goalscorer as far as the English game is concerned, 37 goals ahead of Football League journeyman Jamie Cureton (currently of Exeter City) in second place.

After the Hull game, Palace boss Ian Holloway (who also signed Kev for Blackpool last season) gave Phillips yet another glowing reference: “All I know is the bloke is so professional and is still as fit as a flea. He has the lungs of a 26-year-old.”

Bloody hell. We hope that 26-year-old in question was a registered organ donor, or else something must be done to stop Phillips harvesting body parts again.

Long may your legs hold out!