Whilst travelling in Sydney recently I decided I ought to take in some football. Would I enjoy a temporary summer romance before I returned to the Riverside (my spiritual home)? Or would I be left disappointed by the A-League’s quality?

It’s the 92nd minute inside the Sydney Football Stadium and Sydney FC are holding onto a deserved but delicate 1-0 lead against Gold Coast United. Eighteen-year old Dimitri Petratos scored his first senior goal for the Sky Blues on 33 minutes, a blinder, after long spells of pressure from the home team. As Gold Coast push further forward trying to find an equaliser, they leave themselves increasingly exposed at the back, and after they lose the ball on the halfway line, Sydney full-back Sebastian Ryall bombs forward and plays a peach of a ball into the six-yard box, new boy Juho Mäkelä (Hearts fans may remember his unspectacular time at the club) duly obliges and bundles it in at the back post.

Cue effing insanity. It starts raining beer from all the pints (sorry, schooners) that get thrown in the air. People who don’t have a beer at hand are recycling people’s empty cups and throwing them back at each other. I’m dripping wet. It’s like a Slipknot gig. I start chucking whatever I can get my hands on into the air: beer holders, crisp packets, burger buns, half a Mars bar – I don’t care.

Next, I find myself part of a crowd that’s legging it towards the pitch, jumping over seats two rows at a time. Ryall and Mäkelä – who are enjoying a proper blokes’ hug with each other in front of the crowd – are suddenly surrounded by a swarm of fans, with other players running the length of the pitch to join in this obviously glorious event. Everyone is going crackers. More and more of the ‘Sky Blue Youth’ start throwing themselves onto the massive pile which has now began to form. I’m covered in limbs and I’m doing nothing but kissing everyone and yelling at the top of my lungs. This is brilliant. I could die and I don’t mind. 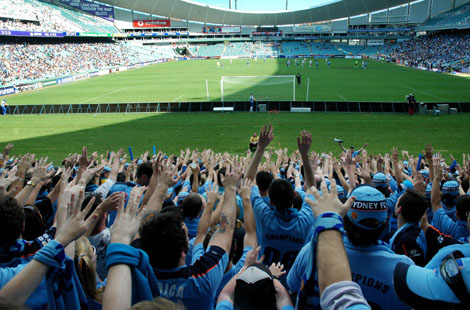 The view from The Cove, Sydney FC

I’m going deeper into the mass. But shit, the advertising boards are snapping and collapsing and fans are pouring onto the pitch like fish out of Captain Birdseye’s nets. Some poor bastard is trapped underneath the heap, his leg is stuck under a Pulsar Watches board and there are at least a hundred nutters on top of him. It turns out to be Matt Jurman and he is screaming in agony and the stewards and fans who aren’t caught up in the madness are trying to free him from certain death. Amazingly, he wriggles free and hobbles off, leaving the celebrations early while we all continue to go berserk, not fussed that we just nearly killed one of our heroes.

I’ve got my arms around some bloke in a string vest with a dodgy beard and a cowboy hat on – is he my soul mate? My mind is bent to fuck. I’m nearly in tears. I’m ringing up our lass to share this defining point in my life with her. It was at this moment that I stopped and began to wonder what the hell was actually going on. Have Sydney FC actually just become the first club team to win the World Cup? Have they won the league? Am I witnessing a historic side guarantee their place in history?

The answer to all of these questions was of course, no. They’ve simply gained three points in an inconsequential match late in the season that sees them remain ninth in the table. “Ah well”, I thought; I was having a brilliant time, and continued in a stirring performance of “Sydney ‘til I die” until long after the final whistle peeped, minesweeping for scabs of beer, conducted the whole time by our marvellous leader, the ‘fella with the megaphone’. He’s a lunatic who would scream at the 500 or so fans who gathered in ‘The Cove’ for an hour before the game, throughout half time, and well after the final whistle. If this lad turned up at the Riverside armed with a megaphone he would receive a balti pie straight between the eyes. Someone might even sacrifice their parmo in a bun.

I came over to Australia in September last year to do a bit of travelling, and wanted to get in as much sport as I could. I went to the first Sydney FC home game I could get to, against Adelaide United, and was very unsure what to expect. I didn’t anticipate much from the quality, and to be frank I was right not to. I was also unsure of what to expect from the crowd. Sydney’s stadium holds over 45,000, and last year they won the league, so I was expecting a decent turnout, comparable at least to a crowd at the Boro. What a surprise it was when barely 7,000 made the trip to see high-flying Adelaide in what I was told was going to be one of the better games of the season.

The first half was alright – scrappy football and not much flair, but I’m pretty immune to that, and embrace it as a luxury when it happens in Teesside. I also enjoyed the luxury of sipping a few beers from my seat. Sydney took a 1-0 lead and all was well, but I couldn’t help being distracted by a group of fans behind the goal to me right. They had some massive flags, a section of drums, and were jumping and singing non-stop. It was like a scene straight out of an Istanbul derby – I was just waiting for a goat’s head to be chucked at Adelaide’s keeper, who was getting plenty of stick.

Half-time came and a combination of curiosity and loads of empty seats led to me having a wander round to see ‘The Cove’ close up. The queuing system at the bar was ruthlessly efficient and the songs were catchy (a fair few ripped-off English chants), and before I knew it I was right in amongst it. The second half was shite though; Sydney threw away a 1-0 lead, conceding two shocking goals in the last five minutes to lose 1-2. The scenes which followed shocked me at first, and then disgusted me. As a Boro fan I am well used to witnessing such atrocities, and usually by the time the goal that has nailed our coffin shut has been announced, thousands of Smoggies have scarpered the crime scene and are well on their way to the pub. Not in Sydney. They didn’t even respond to the goals. They just kept bloody singing. Did they not notice their team’s demise? Where was the abuse directed at their beloved team? Where was the booing at full-time? Who was going to run on the pitch and chuck their season ticket at the manager? What’s more, the mad bastards stayed back late singing songs such as “We’re gonna win the A-League, we’re Sydney, Sydney!” They weren’t; they were rock bottom of the bloody A-League.

So why were they all so goddamned happy? Was it a cultural thing? I didn’t think so, as Rugby League and Aussie Rules games I had taken in had been flatter than a Shrove Tuesday breakfast. I made the trip to see Australia take on Paraguay in a friendly, a game that the Socceroos won 1-0. It was a poor game, barely more than a runabout for some of the country’s benchwarmers, and the atmosphere in the ground was very similar to Sydney FC – most fans were quiet, and there was a section of fans grouped together who fancied singing; only at internationals they got a complimentary flag too! But at the final whistle, a fella who seemed pretty sound of mind turned to me and said that “it was the finest game of soccer he had ever seen”.

Soccer! That said it all. I needed no more explanation. He might have enjoyed the game for personal reasons, but calling it the S word? They were a bunch of clueless, Yank-wannabe, bandwagon jumpers.

I did depart the Paraguay game writing off Australian football fans as tits, and I did assume the role of the condescending football snob. I swore I’d never go again and would save my money for beer and surfing lessons. But a fascination began to develop with those committed singers, and I found myself making the trip back to Sydney for the Gold Coast game, and this time enjoyed the whole thing from within ‘The Cove’. What was interesting was that there was a few Nottingham Forest fans at the game, left over from The Ashes and keen to take in some footy. They were as sceptical as I was against Adelaide, but by the end of the second half, they were loving it, especially the beer bathing. In fact, there’s some footage kicking round in the Fox Sports archives of them acting just like I did at the final whistle. 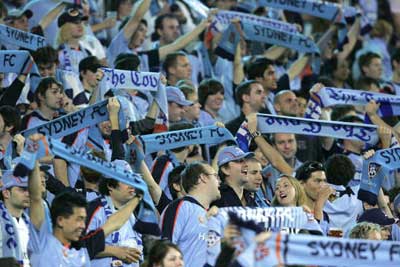 It is the pure love and dedication for their team which I admire about Sydney’s hardcore fans. They might not have any deep culture in the sport just yet – the A-League is less than ten years old – but I am willing to ignore these facts in exchange for enjoying a beer in the stands and not getting told to sit down by jobsworth stewards. In fact, the more I learn about Australian football, the greater my admiration becomes. For example, each team must have a squad of between 20 and 23 players, and are allowed a maximum of five overseas players. While this might be a policy that is synonymous of Australia’s strict immigration policies and insular political outlook, I feel that this is a stance that within the confines of sport can be admired – particularly coming from a country where homegrown players are fast falling out of favour to unheard-of, uninspired and unexciting foreign imports.

It is precisely for this reason that England’s national team is beginning to suffer. And while Australia might not be a team of comparable quality, they certainly have options who are playing every week at their country’s highest level. Beyond this, each club has an annual salary cap of $2.3 million – around £1.4 million. There’s arseholes in the Premier League using bigger piles of cash than that to wipe last night’s… well, use your imagination.

It’s after studying those stats that you realise those lads on the pitch must really love the game, and the fans must love coming to see them play. The football might be mediocre, relative to what is offered in Europe, and enjoyed by small crowds, but at least the league is run in a responsible and sustainable way. When I’m back in England I will look forward to monitoring the A-League next season. Just stop calling it soccer, eh lads.