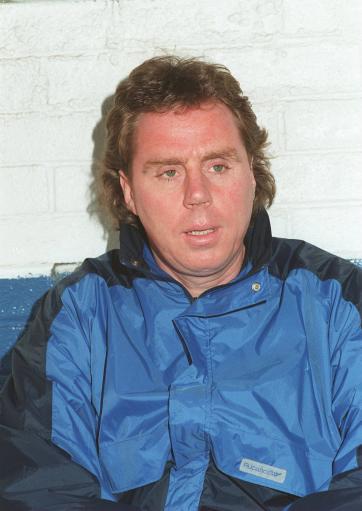 A be-mulleted Redknapp at Bournemouth in the 1992

Only a few weeks into his new Match of the Day pundotry gig, and good ol’ Henry James Redknapp has been lured back into the crazy world of football proper, courtesy of an ‘advisory role’ with AFC Bournemouth.

Redknapp enjoyed a spell with the Cherries in the 70’s while he also managed the club from 1983 to 1992, experiencing both promotion and relegation with the club. Now, however, Harry is heading back to Dean Court to help his old club.

Here’s the Bournemouth statement in full…

Former manager Harry Redknapp has taken up an advisory role at the Goldsands Stadium.

Redknapp, who led the Cherries to their highest ever finish in 1989, will not have an official title but will offer his advice and expertise to all aspects of the club. The former Portsmouth, West Ham and Tottenham boss will also travel with the Cherries squad to Huish Park tomorrow as they take on second placed Yeovil.

Chairman Eddie Mitchell was delighted with the news and believes the 65-year-old will prove to be an invaluable asset for the club.

“I met Harry for a chat this morning and he offered to come in on a voluntary basis,” Mitchell told afcb.co.uk.

“He still has a passion for the club and for football, and he’s got too much to offer for us to let him slip through our fingers.

“It’s been in my mind for quite some time to get him involved, and the timing seems to be perfect for us to tap into his knowledge.”

Both Groves and Brooks were part of Redknapp’s backroom team during his second spell in charge at Fratton Park, which included winning the FA Cup in 2008, and Mitchell hopes they can enjoy success at the Goldsands Stadium.

“Paul and Shaun will still have the final say on all football matters, there’s no doubt about that. They’re very astute people and they’re not above listening to anyone, and I’m sure they can learn from him,” he said.

“They have both worked with him before and I think there’s only person who would be able to get on that coach tomorrow without Paul and Shaun rejecting the idea, and that one person is Harry.”

The Cherries currently find themselves sixth from bottom of League One, with just three points from four games.

Interestingly, current manager, Paul Groves, worked under Redknapp at Portsmouth, so it should be a good fit. And whatever you think of Harry, he’ll surely help kickstart the team’s season. Once he doesn’t get carried away with buying and selling players, that is.