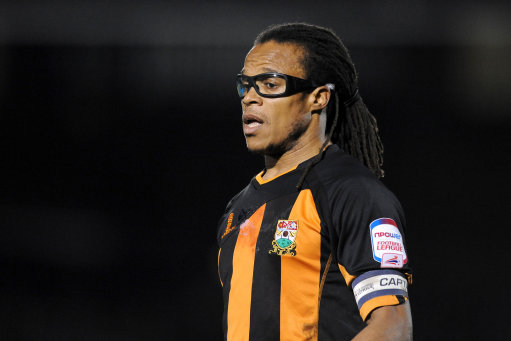 There are few worse feelings in football than facing up to the miserable, soul-sapping journey home that follows any given crushing away defeat – especially if you’ve driven over 220 miles to watch your side get soundly trounced of an afternoon/weeknight.

Having made the three-and-a-half hour journey from Barnet to Accrington to watch their club go down 3-2 in League Two on Saturday, 36 members of The Bees’ traveling contingent were faced with misery heaped upon misery after the game when the supporters’ coach conked out on the M6.

Thankfully, the 36 fans were rescued from the hard shoulder by a guardian angel in the guise of Barnet player-coach Edgar Davids. Why? Because he’s Edgar f**king Davids that’s why!

When the Barnet team bus passed the fans stranded on the motorway on their way back from Lancashire to Underhill, Davids ordered the driver to stop at the next service station and told his players to get off and wait while the bus returned up the M6 to pick up the fans and escort them to the services. Being the bloody nice guy that he is, Davids also fronted the cash and saw that the players got the coffees in for the fans ahead of their arrival.

“I saw the coach on the side of the high way with some of the supporters standing outside in the cold.

“It was the least I could do for my team, to send the coach back to pick them up so they don’t stand in the cold.

“Shortly after the coach had arrived it started to rain, I was glad I did it. No man left behind!”

One supporter posted on the Barnet fans’ forum:

“The coach is warm and very, very plush. It takes us to the services where the players have been treating their bodies like temples at Burger King and sampling the other limited delights of a northern service station.

“To a man they are friendly, talk to the fans, pose for photos and wish us all the best. Then they get back on their bus. Our replacement bus arrives and 11.15pm were back in Barnet.

As if Davids wasn’t the coolest cat in the English game already, he goes and does a solid for his fans – something those Bees supporters will never forget as long as they live.