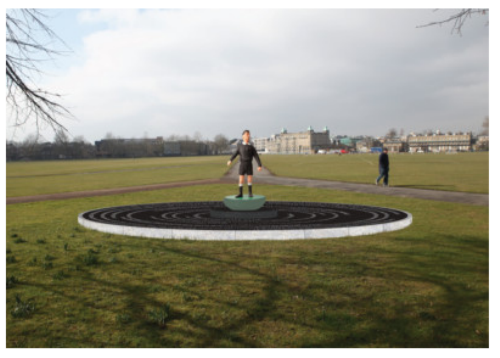 To commemorate the 400th anniversary of the city’s ownership of the very field on which the game we’d recognise as football – a fine swathe of grass known as “Parker’s Piece” – Cambridge City Council are pressing ahead with plans to install a giant Subbuteo referee statue to mark the spot that is universally regarded as the original birthplace of football rules, which were later adopted by the Football Association.

“Cambridge Rules” were first adhered to during a game on Parker’s Piece in 1848 after a student meeting at Trinity College, where it was decided that goal kicks, throw-ins and forward passes would all be formally introduced, while the practice of running with the ball in your hands was to be strictly outlawed.

The FA then leaned heavily on Cambridge Rules when drafting up their first rule book, including the original 13 laws of the associated game, in a tavern in London in 1863.

The £88,000 sculpture will be 6’7″ in height and set upon a giant centre-spot, surrounded by the text of the original Cambridge Rules.

Very, very cool. Any long-time fan will know how much we love the Subbuteo aesthetic here on Pies, so this is right up our street. It’s a big “+1” from us.

Many thanks to Pies’ pals over at The Boot Room (follow them on Twitter @the_boot_room you ‘orrible lot) for the nudge.