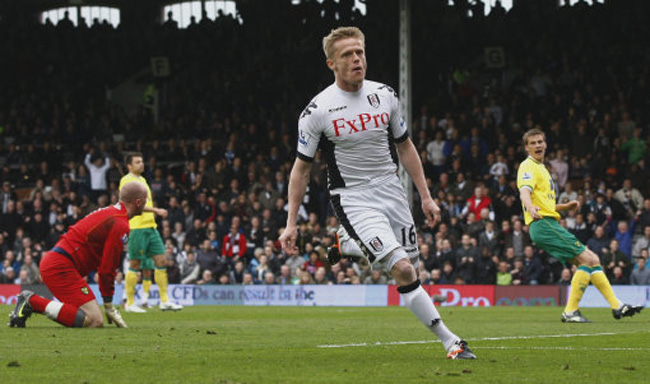 Surely one of the most under-rated players in the Premier League, Clint ‘Deuce’ Dempsey netted his 13th league goal of the season on Saturday as Fulham chalked up an impressive win against Norwich.

The attacking midfielder netted after just two minutes, scoring with his thigh after Canaries’ ‘keeper John Ruddy had failed to hold Bryan Ruiz’s effort. The home side pushed for a second and were rewarded soon after with Dempsey involved again. On 13 minutes, the American set up Damien Duff who cut inside before firing past Ruddy.

Norwich tied hard to get a foothold in the game but couldn’t make the breakthrough, while the Cottagers hit the woodwork on two occasions as they looked to kill off the game. However, it took until the 77th minute for the third goal of the game to come, courtesy of Norwich sub Aaron Wilbrahamson. It was a goal the visitors deserved after their much-improved second-half display, but ultimately it wasn’t enough to prevent Fulham from taking all three points.

Both sides now find themselves on 39 points, with Fulham one place above Norwich in 11th, courtesy of a superior goal difference.