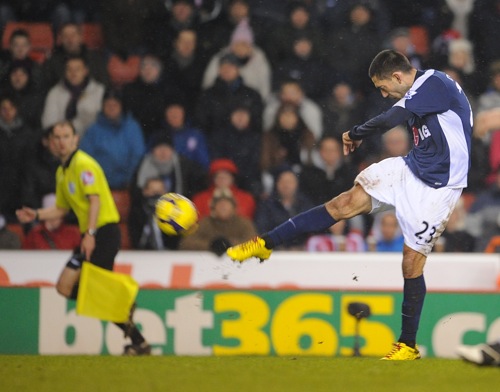 No less a publication than the New York Times took note of Deuce’s wonder goal against Stoke earlier this week (watch it here), a small but sure sign that there is a growing appetite for football/soccer in the States.

The NYT ran a blog post yesterday titled “Spectacular Dempsey Goal Raises Eyebrows, and His Reputation”. Many other US blogs mentioned the goal, such as EPL Talk, which compared the strike to the screamer scored by John Harkes for Sheffield Wednesday in 1990.

Sometimes all it takes is one goal to make a player, and since his move to England in 2007, Dempsey has slowly played himself into the spotlight, not to mention a potential transfer to a bigger club than Fulham; Tuesday’s eye-catching goal against Stoke has boosted his reputation further. And of course, the bigger Dempsey becomes, the faster the game will grow in America.

Dempsey will never be a David Beckham type of celebrity, but his excellence may yet be enough to put him on the cover of Sports Illustrated. Fabio Capello, take note.