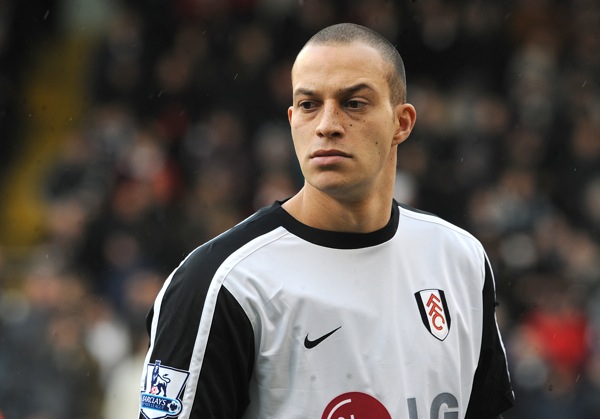 Lots of calls of late for Bobby Zamora to make it onto Fabio Capello’s longlist for the 2010 World Cup, from the likes of club manager Roy Hodgson, team-mate Zoltan Gera and skull-faced love machine Teddy Sheringham (football’s own Ronnie Wood).

It’s true that Row Z is having his best ever season in the top flight, and he’s scored a couple of out-of-character crackers recently, but in my opinion he’s NOT England material.

It’s not that I don’t think he’s a very strong striker who is capable of  unsettling most defenders. It’s not that I don’t like him as a player – believe me, I’d LOVE to see him score the winning goal in the World Cup final and then ‘Shhhh’ Sepp Blatter and Michel Platini. It’s simply that his playing style is not well-suited to international football – put him in an England shirt and he wouldn’t get away with half of the physical stuff he does in the Prem. That’s a problem, and other big front men such as Peter Crouch have experienced it before on the international stage. Even Alan Shearer had to tone down his natural elbows-and-all game for the Three Lions.

Of course, I could be way wrong; Zamora might thrive for England. He might even be the next Toto Schillachi. A Rooney/Zamora partnership appears balanced too, so it would be worth trying it out in one of England’s World Cup warm-up games. But I suspect that Capello’s pecking order has Emile Heskey, Crouch and Carlton Cole way ahead of Zamora.

Would you take a gamble on Bobby, or do you think he lacks the quality required to play top-level international football?