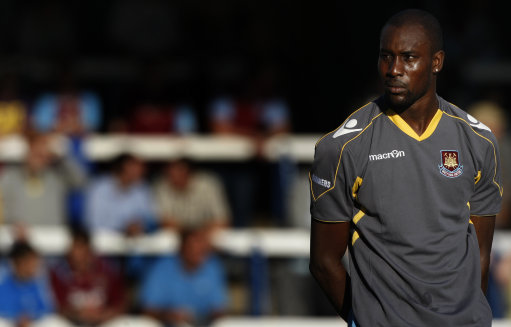 WITH it looking increasingly likely that their want-away holding man Javier Mascherano will join Barcelona in the non-to-distant future, it seems that Liverpool are already drawing up planso fritter away their imminent £18 million windfall.

Word on rumour street is that a £6 million slice of the Masch cash is being put aside to fund a move for West Ham target man Carlton Cole, with a further £6 million to be offered in various performance-related clauses – lets just hope that they don’t concern penalty conversion rates for Carlton’s sake.

A further £7 million has been earmarked for the acquisition of Marseille’s stroppy winger Hatem Ben Arfa, who refused to train for the French side after finding out that they’d blocked his move to Newcastle United a few weeks back.

The third and final name in the prospective triumvirate is a little more meat-and-potatoes, with ‘Pool boss Roy Hodgson apparently lining up former Fulham charge Dickson Etuhu as the man he wants to step into the Mascherano-shaped void about to be left in his midfield, although the recent arrival of erstwhile Danish anchor Christian Poulsen may suggest otherwise.