Steve Kean’s Blackburn Rovers picked up their first point of the new season at Craven Cottage, courtesy of a superb strike from Ruben Rochina on 32 minutes. The creator of that goal, David Hoillet (one of the few Canadians playing at a high level), would have to be stretchered off later on, after clashing with Fulham keeper Mark Schwarzer. The ever-reliable Bobby Zamora netted the Cottager’s equaliser just six minutes after Rovers goal to give the west Londoners  share of the points. 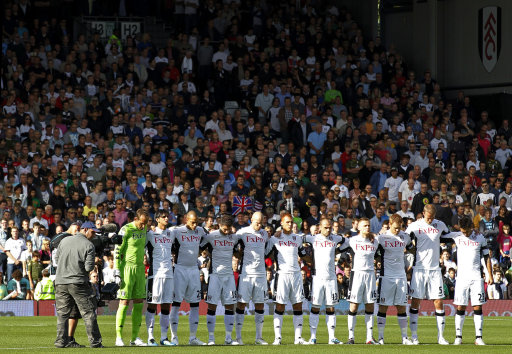 Fulham players and supporters observe a minute of silence in memory of victims of the Sept. 11, 2001 terror attacks, before the start of their English Premier League soccer match against Blackburn Rovers at Craven Cottage