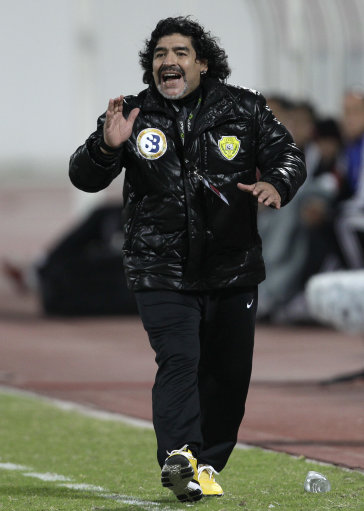 The Sun have no doubt snared the biggest story breaking this morning with the news that Diego Maradona has been forced to nix a family holiday to Disney World after being denied a Visa by the US authorities.

Maradona had booked a family trip to the Florida theme park for his girlfriend, his daughter and his gaggle of grandchildren, but was denied entry to North America due to his past dalliances with his “red-leaning” friends.

Apparently he also pleaded his case in person at the US embassy in Dubai, but his Visa application was still refused, with The Sun’s conveniently placed source describing the decision as purely  “political” before telling the tabloid:

“[Maradona’s] relationship with the US has never been good. His friendships with Fidel Castro and Hugo Chavez and other enemies of the US stopped him being given permission before.

“It was a bit of a kick in the teeth for Diego. The family were really excited about the holiday.”

Kick in the teeth? If you’re going to have the office intern drum up your quotes for you, at least go with something a little less colloquial.

Anyway, no leaked photograph of Diego with Goofy (a la Mario and Spongebob). That’s the real tragedy here.