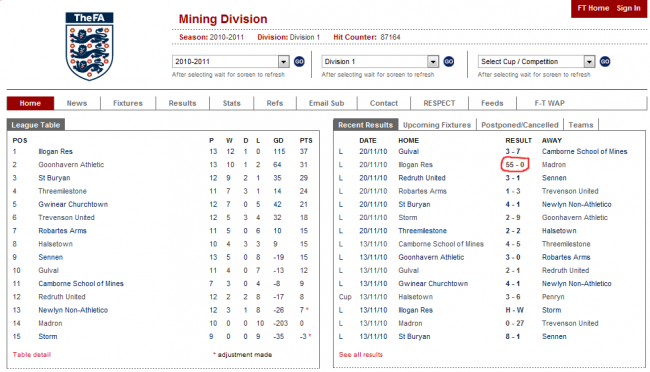 When Madron, one of the worst teams in Cornwall’s Mining League Division 1, played against league leaders Illogan Reserves recently, they had to make do with only seven players, and no recognised keeper, after several of their team dropped out before kick-off. Unprofessional – Fergie would not stand for that shit.

The end result was a 55-0 mega-thrashing for the Penzance-based club. That’s one goal conceded approximately every 100 seconds. Madron’s goal difference is now a stupendously bad -203.

“Nobody enjoys games like that. We certainly didn’t enjoy it,” said Illogan assistant manager Mark Waters after the game. “I have nothing but admiration for the seven Madron players, but it does make a mockery of the league.

“We paid Madron a lot of respect and just got on with the game. They came into the bar afterwards and they were as good as gold.”

PS. Cornwall’s Mining League Division 1 has a contender for ‘Most Awesome Club Name In Football’: Storm FC, a team based in Camborne. No clue why they are below even abject Madron though, on -3 points. Anyone?