Days after a group of Blackpool supporters fell foul of the Civil Aviation Authority for flying banners over Deepdale to mock local rivals Preston North End and their relegation into the third tier of English football, a fellow Tangerine on the Countdown production team has shown his uninspired cohorts how to go about taunting PNE fans properly – through the medium of daytime television quiz shows… 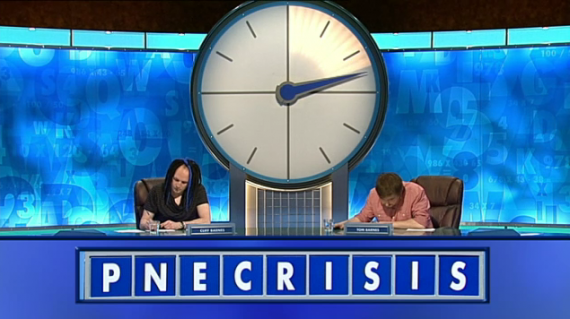 On an episode of Countdown that aired earlier in the week, a ‘Countdown Conundrum’ (i.e, a nine-letter anagram that the contestants have to solve) was revealed by host Jeff Stelling that read ‘PNECRISIS’.

Amazing work, though neither of the contestants managed to solve the word puzzle, with the answer turning out to be ‘priciness’.

Apparently several North End supporters smelt a rat, took umbrage and complained to Channel 4 about the dig – leading a spokeswoman for the show to explain that it was ‘all intended as a bit of friendly banter’.