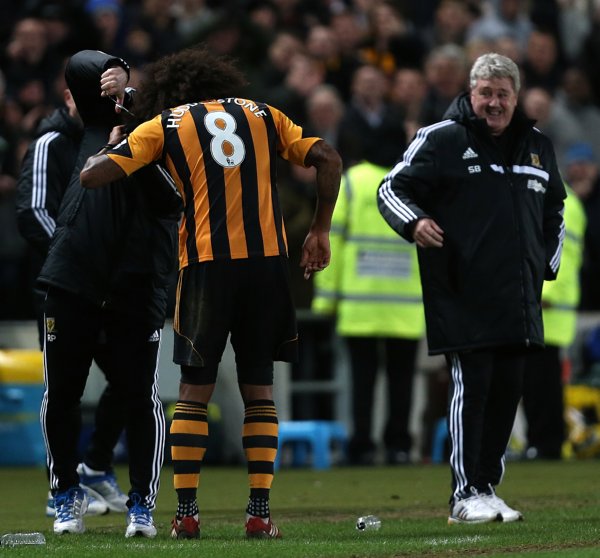 As you’re probably well aware, Tom Huddlestone was finally able to have his ginormo’fro strimmed last week after breaking his 32-month scoring drought with a goal against Fulham at the tail end of December.

At current count, Huddlestone has raised just over £50,000 for Cancer Research via donations made to his ‘Huddlefro’ campaign, but the Hull City midfielder has been able to bolster that amount by selling the lock of hair he had snipped on the touchline (courtesy of stylist to the stars, Hull physio Rob Price) in celebration after scoring against Fulham in a separate Ebay auction.

Having been placed on sale on December 30th and described as “fluffy” and having just “one previous owner”, the handful of of Huddlefro eventually sold, 114 bids later, for an incredible £6,300 with all proceeds going to charity…

After the sale ended on Monday, Huddlestone was overcome by the amount of support his campaign had received, telling the Independent:

“It’s raised an amazing amount of money, more than I could have imagined, and the generosity from everybody involved has been incredible.

“I’d like to thank everybody for donating as much as they have done, and watching the total amount rise, particularly since the final whistle against Fulham, has meant a great deal to me.”

For the record, the lucky winner of the auction was apparently a Hull fan, and we use the word ‘lucky’ in the loosest sense of the word there – though, of course, the real winner was Cancer Research, which ain’t ever going to be a bad thing.

Kudos to Huddlestone and all involved.