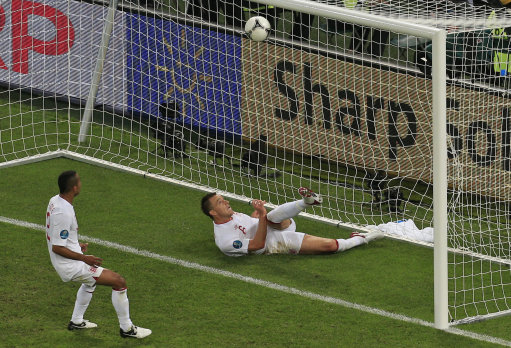 Welcome to the future! The International Football Association Board have approved the introduction of goal-line technology after a vote at FIFA’s headquarters in Zurich.

Two systems, ‘Hawk-Eye’ and the dismally-named ‘GoalRef’ will be introduced for the Club World Cup in December (involving Chelsea), although the Premier League may move even quicker and get it installed at some point during the forthcoming league season.

After the new technology was given the all-clear, FA bigwig Alex Horne, said:

“We welcome today’s decision by IFAB and will engage in discussions with both Hawkeye and GoalRef in the near future with a view to introducing goal-line technology as soon as is practically possible.”

“It may be December until the technology is absolutely finally approved and installed in stadia. Priority is given to the Fifa Club World Cup in Japan.

“It might be that it is possible to have it part way through the 2012-13 season. If all 20 clubs agree a switch-on weekend I don’t think anyone is disadvantaged.”

How exciting! To be honest, once it works (and let’s hope it does), I can’t really see any negatives. I bet by the 2014 World Cup we’ll all be asking ourselves why it took so long to introduce in the first place.

And while the footballing authorities are at it, let’s introduce a diving panel which takes retrospective action on cheats . Get that sorted out as well and the game will be a lot better all round.