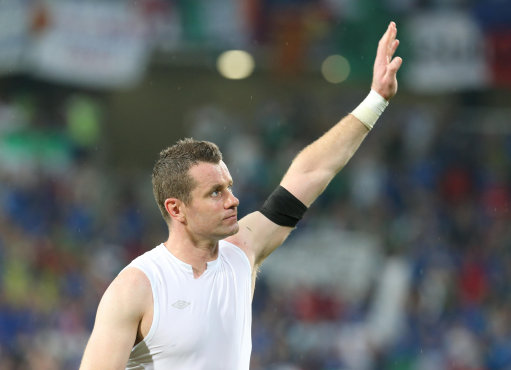 One of the best goalkeepers to ever grace the Premier League, 36-year-old Shay Given has decided to retire from the international game after racking up 125 caps for the Republic of Ireland, a record for the Boys In Green.

The Aston Villa glovesman, oft described (erroneously) as a ‘short goalkeeper’ (he’s 6’1″), wasn’t at his best in Ireland’s disappointing Euro 2012 campaign, and after much thought, decided the time was right to step aside. The Donegal man said:

“I have dedicated 16 years of my life to my county and I have a great affinity with Giovanni Trapattoni’s squad. I’d like to thank the Giovanni, Marco (Tardelli) and Alan Kelly for their support during my time with the team.”

“I will continue to be Ireland’s biggest fan and wish the lads well as they embark upon their new campaign.”

The high-point of Given’s international career was arguably Ireland’s 2002 World Cup campaign, where they reached the last 16 only to be eliminated by Spain in a penalty shoot-out.

The former Newcastle United man will continue to line out for the Villans. However, Given’s retirement leaves the Republic rather short of goalkeeping options. The likes of Sunderland’s Keiren Westwood, Millwall’s David Forde and Motherwell’s Darren Randolph don’t really inspire much confidence, do they? And then there’s big Paddy Kenny to think of – will he return from international exile? And will Giovanni Trapattoni want him to??!

Anyway, here’s a rather tasty save by Given from the great Zinedine Zidane in 2005…