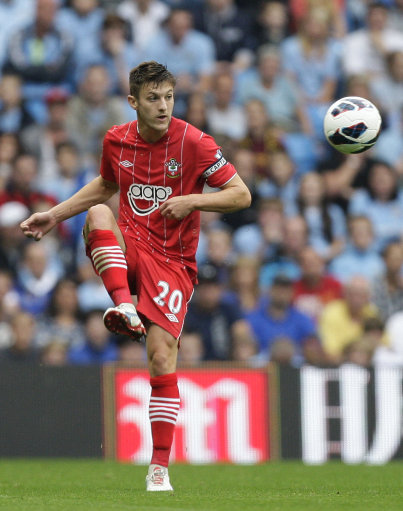 With Theo Walcott, John Terry, Ashley Cole and Daniel Sturridge all dropping out or struggling with various knacks and illnesses, Roy Hodgson has called the uncapped triplet of Adam Lallana, Raheem Sterling and Jake Livermore up into the England squad for Tuesday night’s World Cup 2014 qualifier against Ukraine at Wembley.

Lallana – who has one U21 cap dating back from 2008 – has impressed with Southampton for several seasons now, not only with his loyalty to the club but with his largely under-the-radar skills, slick passing ability and clever ball-work. We won’t get carried away and say a call-up is long overdue or anything, but Lallana’s been a stand-out at Soton for a very long time now and congratulations are definitely due. Kudos.

Sterling is a little more ‘flavour of the month’ as things currently stand, with a couple of decent, if slightly fleeting performances strung together at Liverpool over the past few weeks. He’s whippet-quick, effervescent and direct, but with Alex Oxlade-Chamberlain already having a foot in the door, Sterling is unlikely to be prefered to his like-for-like senior (just about) alternative. The best he can hope for is a few minutes at the end.

There’s currently a lot of angst that Swansea’s Nathan Dyer didn’t get the nod. Six and two threes really, and getting 17-year old Sterling used to life in the senior set up is definitely a good call – especially seeing as though he appears to be tipped as a future fixture by almost everybody inside the England camp.

As for Livermore, well… he’s Jake Livermore. It’s tough to get excited over that one, and he probably won’t play anyway so we’ll keep it at that for now.