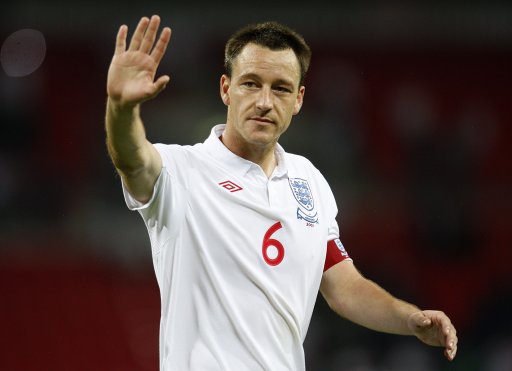 A bit of hot breaking news from 13 hours ago for you: John Terry has made the call to retire from international duty with England at the age of 31, admitting that the FA’s decision to bring about a disciplinary hearing into his fracas with Anton Ferdinand (which is currently getting underway at Wembley this morning), after having already been found innocent in a court of law, has made his position in the national team fold ‘untenable’.

The Artist Formerly Known As England’s Brave John Terry (TAFKAEBJT) phoned Roy Hodgson to inform him of his decision yesterday evening, before issuing the following statement:

“Representing and captaining my country is what I dreamed of as a boy and it has been a truly great honour. I have always given my all and it breaks my heart to make this decision. I want to wish Roy and the team every success for the future.

“I now look forward to playing for Chelsea and challenging for domestic and European honours, and I want to thank the fans and the club for their continued support.

“I would like to thank the England managers who have selected me for my 78 caps. I have had great pleasure in sharing that honour with all the players that I’ve played with.

“I would like to thank them, the fans and my family for their support and encouragement during my international career.”

It would appear obvious that Terry’s decision to call time on his England career is rooted solely in personal animosity toward the FA, given that the man himself would likely have played himself into the ground for his country – such was his footballing demeanour.

He famously said he’d ‘never turn his back on England’ – some may choose to be snippy and retrospectively snide about that defiance today – but it’s an inescapable truth that his circumstances have irrevocably changed since then. There’s also a school of though which suggests he’s jumped ship before he was pushed – robbing the FA of the chance to dishonourably discharge him by pulling the old “You can’t fire me, I quit” routine.

Anyway, there goes a truly great English centre-half who will, sadly, only ever be remember as a ‘c**t’ by the vast majority of people everywhere.

Yes, his two spells as captain ended in quagmires of hostility and turbulence, but Terry the England player was a fearsome combatant and a damn fine international centre-back for many-a-year. Alas, Terry the man was probably not nearly as reprehensible as you’d like to think he was either.

So does he retire an England legend? I expect almost every single different person you ask will have a different answer to that particular question.