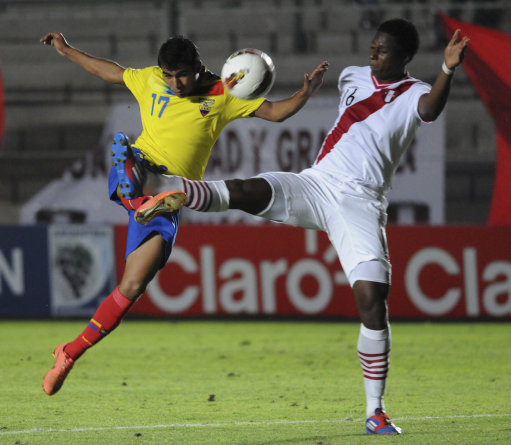 CONMEBOL have intervened and sent one of Peru’s players from the ongoing South American U20 Championships in Argentina over allegations that he may actually be a 25-year-old bloke from Ecuador!

Max Barrios was registered for Peru’s tournament squad, but South American football’s governing body are currently investigating that the player may actually be Juan Carlos Espinosa, 25, from Ecuador after being tipped off by Ecuadorian officials who his face during the recent group game between the two countries.

CONMEBOL spokesman Nestor Benitez said: “The latest information we have is that Barrios is returning to Lima to explain his situation to the Peruvian Football Federation.”

The Ecuadorian FA claim that ‘Barrios’ was actually born in 1987 in Machala, Ecuador, who played for a succession of Ecuadorian teams before ‘disappearing’ from their records in 2012, only to resurface in the Peru U20 squad.

The player’s father, Angel Barrios, is denying that his son has done anything wrong, instead claiming that Max has dual citizenship having been born to an Ecuadorian mother then moved to live with his Dad in Peru at the age of six when his parents split up.

“My son hasn’t done anything bad, he simply has dual nationality and decided to play for Peru. I have a birth certificate which is formal and legal.

Yes, and we bet they’re all written in blue Crayola on the back of a rib shack napkin.