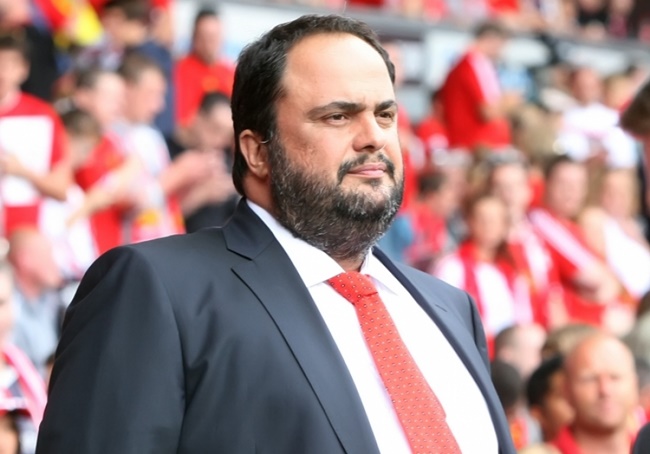 After seeing his side slip to third in the table, Olympiakos owner Evangelos Marinakis has thrown a wobbly and ordered the majority of his senior players to “go on holiday” for the rest of the season.

Following a 20-day Super League hiatus brought on by PAOK’s gun-toting club president, Olympiakos could only muster a 1-1 draw against mid-table Levadiakos on Saturday – a result that leaves them six points behind AEK Athens at the summit with four matches remaining.

Unimpressed by what he witness, Marinakis has fined his players €400,000 and banned many of them from returning to the club, barking that he will instead call up a raft of youngsters from the Under-20 squad for the remainder of the campaign.

According to AFP, Marinakis delivered the following edict to the Olympiakos team shortly after Levadiakos scored their 87th-minute equaliser:

I will build Olympiakos from the beginning and it will become the team we are dreaming of.

I and the rest of the fans have tolerated you enough. You will leave today and go on holiday.

The amateur teams live with the basics but they love Olympiakos and their supporters much more than you do. [You think about] the nice houses you live in and your cars and don’t care about the team.

I pay millions for you to have everything. With your actions, I fired three coaches, but at the end it looks like you were at fault.

Marinakis has become accustomed to unbridled success in Greece, with Olympiakos having won the last seven Super League titles on the bounce.

That said, he now also owns Nottingham Forest, so hopefully presiding over a prolonged spell of underwhelming mid-table mediocrity on both fronts might calm him down a bit.