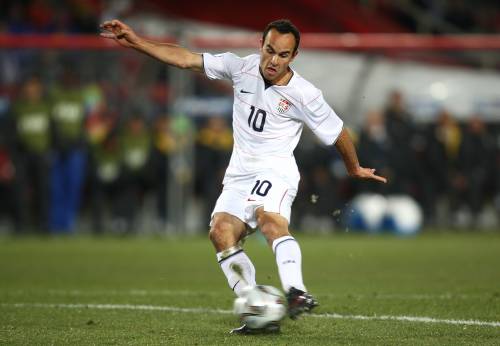 USA star Landon Donovan is seemingly under the illusion that the current England World Cup squad has no discernable weaknesses – maybe he’s just being polite.

Anywho, the LA Galaxy forward does believe that the time he spent on-loan at Everton last season will provide him with valuable insight into the English style of play, insight that he may be able to put to good use when the two countries meet on Saturday in Group C’s opening game.

So said Donovan himself;

“In my opinion, England are one of the top teams in the world and top teams don’t have any weaknesses.

“It would be hard for me to point anywhere and find a weakness in their team but my experience at Everton was valuable in a lot of ways, for me personally and also in getting the chance to play against some of the players we will see on Saturday.

“It also gave me the ability to understand the way their league is, the way and style most teams play in their league.

“Those are all beneficial things to us, but will they have a huge impact on the game? Probably not, but having some comfort in that way will be helpful on Saturday.”