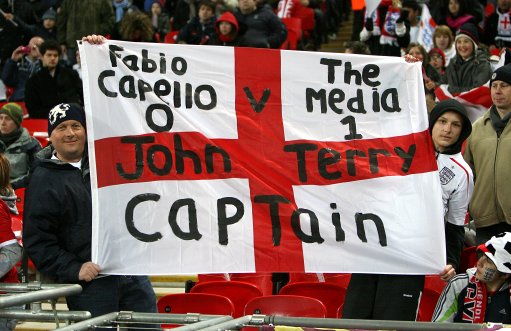 Swiftly accompanied by a redolent reek of feckless inevitability come a flurry of reports this morning that formerly ostracised England captain John Terry will be handed back the armband for the Euro 2012 qualifier against Wales at the arse-end of the month.

Terry was stripped of the captaincy by Fabio Capello back in February of last year as a result of the ructions his affair with Wayne Bridge’s ex-girlfriend (amongst other various misdemeanours) caused within the national set-up, though several of this morning’s national newspapers are claiming to have the skinny on Capello’s plans to reinstate the centre-half on a ‘one-off’ basis for England’s trip to the Millenium Stadium on March 26th.

The Times are reporting that Capello is now seriously considering overturning his decision to indefinitely relieve Terry of his duties after being ‘seriously impressed’ by the defender’s ‘professionalism’ during England’s recent friendly with Denmark – a game which saw the armband passed over his head several times as captains and vice-captains were continually substituted on and off at a fair old lick.

The Daily Telegraph are also tentatively suggesting that Capello may give Terry a singular sampler of former glories, though they are also keen to point out that Rio Ferdinand is indeed still the de facto England captain and will remain as such for the foreseeable future – with the man himself admitting that the recent talk of Terry seizing the role back has been ‘a little bewildering’.

The Sun are running quotes from a dubious ‘England source’, who apparently gabbed:

“Rio had a conversation with Franco Baldini and was reassured that he would continue as captain once he is fit again. Baldini was quite clear about his position.”

It’s perhaps worth mentioning that, while Ferdinand is currently out of action, he is not definitely out of the upcoming qualifier yet – though Sir Alex stated last week that he is unlikely to be available again before the beginning of April.