It’s competition time here again on Pies folks, and this prize is going to take some beating!

As you’ll be aware, Lionel Messi nabbed his third-straight Ballon d’Or gong earlier this week, and to celebrate Adidas have produced a very special pair of boots for him to wear during Barcelona’s La Liga tie against Real Betis on Sunday… 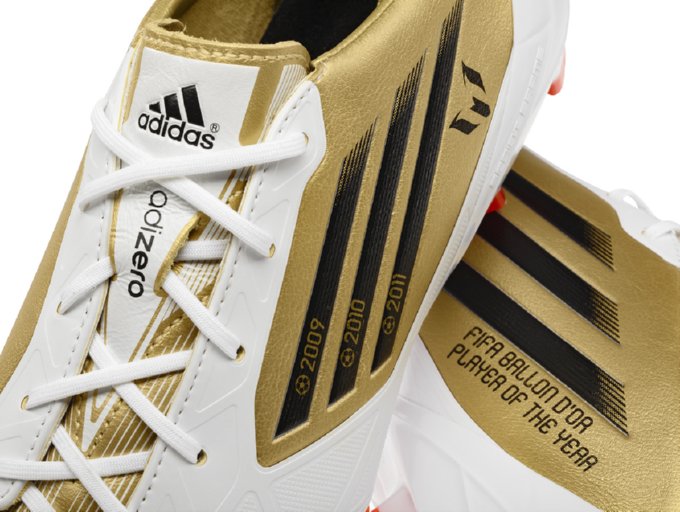 The customised adizero F50 boots have been produced in a celebratory gold colourway and feature the flag of Argentina, the years of Leo’s Ballon d’Or successes and a thank you message to his fans.

To celebrate Leo’s big win, Pies has teamed up with Adidas to give away a pair of these shuper shexy gold adizero F50 boots to five – count ’em, FIVE lucky winners.

To be in with a shout of snagging a pair of gold-coloured boots (personalised with your name through miadidas.com) all you need to do is email us at waatpies@gmail.com with the correct answer to this question:

Five correct answers will be chosen at random after the competition closes at midnight (GMT) on Monday 16th January.

T&Cs: Competition is open to Pies readers worldwide. One entry per person. Five winners will be picked at random (by me) once the competition closes.