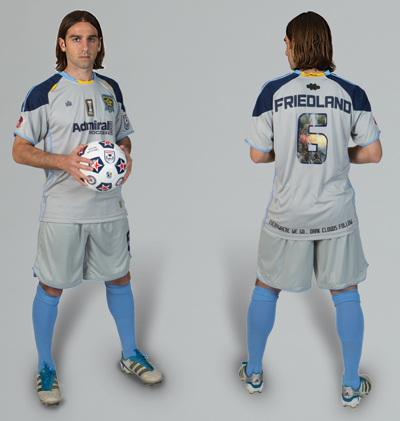 NASL side Minnesota Stars launched their new kits for 2012 not so very long ago and, while the home strip’s pretty swish and all, it’s their away kit that well and truly steals the show.

The silver kit is made by Admiral – Christ, remember Admiral? – and was co-developed by Stars defender, assistant coach and director of business development Kevin Friedland (and Nicolas Anelka thinks he’s being put to work!) and incorporates a different photo of the Stars’ fans within each separate squad number – a sort of ‘we take you on the road wherever we go’ kind of gesture…

It’s not a new concept (Sevilla and Atletico Madrid have already been there, sort of done that – though the both actually charged their fans for the privilege of having a minute 2mm x 2mm thumbnail on the back of their shirts) but it’s definitely a unique spin on it.

A unique spin that definitely gets Pies’ seal of approval.