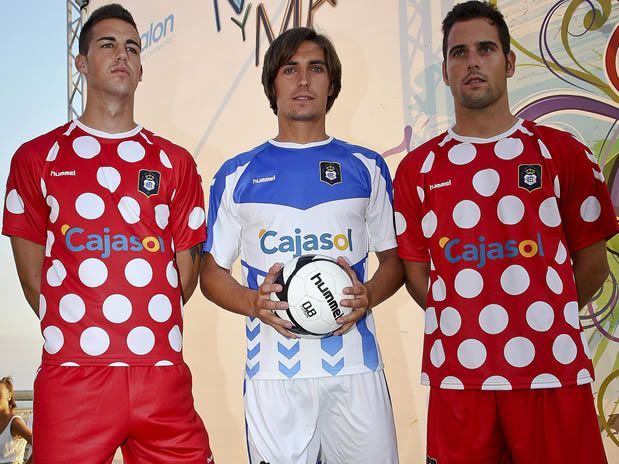 Since it leaked on Twitter a fortnight or so ago, Recreativo de Huelva fans have been up in arms about the club’s new 2012/13 Hummel away kit, and quite rightly so – being as it is absolutely bloody awful.

As has been pointed out several times by rival supporters, the kit appears to be made from offcuts of the material Disneyland Paris use to deck out their Minnie Mouse costumes, with the Recreativo supporters’ club describing it as ‘the ugliest shirt they’d seen in years’. They’re not wrong. If you squint it looks like a particularly angry case of teenage acne.

Indeed, some of the more fidgety Recre fans are becoming more than a little concerned about looking like prize pricks on their travels next season and have organised a protest march this week – with the express intent of pressuring Hummel into producing another kit in time for the start of the season.

Hummel’s excuse for their polka-dotted eyesore? They ‘only ten days to come up with two new kits’ after agreeing to take on the Recreativo de Huelva contract at the last minute.