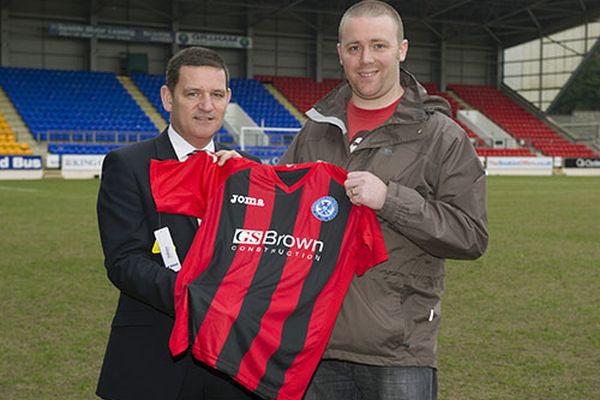 Earlier in the season, St Johnstone were dumped out of the Europa League qualifying rounds by Eskisehirspor, though the hospitality that the Turkish club showed their Scottish counterparts on their first foray into European football for over a decade obviously made a lasting impression.

Eskisehirspor put on a red carpet welcome for the Saints and their fans when they arrived in Turkey for the first leg and one fan, Kevin Heller (pictured above) was so impressed with the treatment that he contacted his beloved St Johnstone and suggested that the club pay homage to their new Turkish allies by playing in Eskisehirspor colours on the road next season.

Lo and behold, Saints have just revealed that their new away kit for 2013/14 with be red and black stripes – the club colours of you know who.

“Fans and club officials really hit it off over the two games. We were treated like royalty over there and we did our best to show them true Scottish hospitality when they came to Perth.

“Both clubs were making the most of their European experience and when one of our fans, Kevin Heller, wrote to the club suggesting that we could adopt their red and black colours for our away kit for next season we were delighted to go for it.”

“Close ties were created over the two matches and fans have continued to keep in touch through Facebook.

“They made us feel really welcome and we tried to return the favour when their supporters came to Perth. I’m delighted the club have taken up the suggestion of an away kit in their colours and I am confident it will prove popular with fans.”

How nice. Apparently the new-found friendship between the two clubs has also seen Saints fans nominate Eskisehirspor for the UEFA Fair Play Award, while the Turkish side took to the field for a recent domestic game carrying a large banner stating “We are all St Johnstone fans”.

Blimey. Get a room.