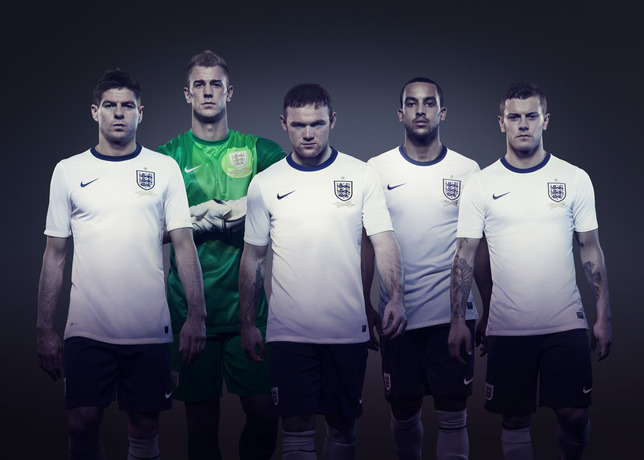 We’ve already seen the teaser photo earlier this afternoon, but Nike have now sent out a full wodge of photos of their new England strip for 2013, and here the bugger is in all its glory…

A clean, distinctive design takes the kit back to its roots with its traditional colors of white and dark blue to celebrate the Football Association’s 150th anniversary.

The iconic three lions crest was prominently featured in dark blue on the team’s first kit, and once again, the crest is the proud focus – now with a gold border, a gold star above it signifying England’s World Cup win, and a gold ribbon graphic below inscribed with “150 years” and the dates 1863 and 2013, marking the Football Association’s anniversary.

The blue on the new kit is the same dark blue colour that featured on England’s first kit. Embodying the clean lines and understated style of the best of English fashion, the white shirt features a dark blue classic crew neck collar, while two side vents on the hem of the shirt subtly feature the St George’s cross.

Damn it. We’re so close to liking it, but something’s just not quite clicking yet. We definitely need to see this thing up close and personal to make a more assured judgement *nudge nudge Nike wink wink*

The 2013 kit seems to be polarising opinion across the board so far today. Anyone changed their mind after seeing England’s new strip in its entirety?