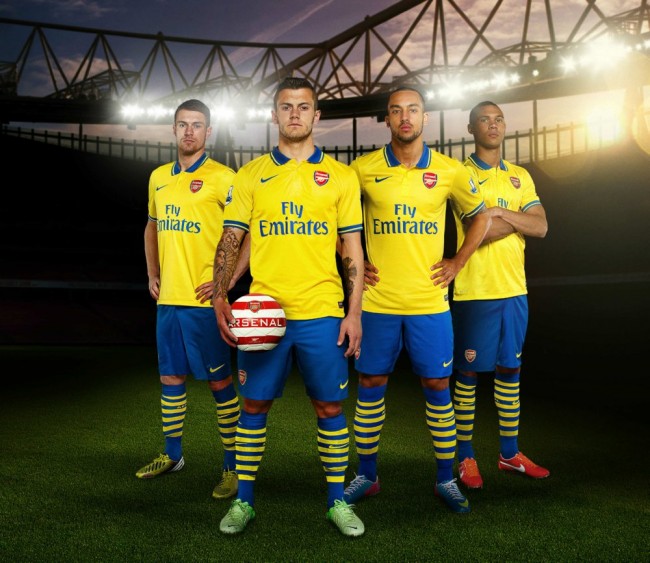 You all know what it looks like by now thanks to the plethora of leaked images that have been doing the rounds of late, but we’ve finally got our hands on a batch of Nike-sanctioned photos of the new Arsenal away kit for 2013/14 (which will be Arsenal’s final Nike kit before Puma take over next summer), and these are those…

As always, some of Nike’s bumph is just exquisite…

“The socks feature the traditional Arsenal hoop sock design in blue and yellow. The club was the first to wear socks featuring hoops in the 1930s under the innovative stewardship of manager Herbert Chapman.”

“Nike embarked on an innovative program creating 3D body scans of some of the world’s leading footballers to produce a more athletic fit tailored to the contours of their bodies.”

To be prefectly honest, we we’re overly enamoured with the yellow colour (or the plastic buttons) when we first saw it, but we must admit that the Gunners’ new togs are really starting to grow on us now – with just a hint of the ‘Invincibles’ era almost bound to send most Gooners off into joyous, lucid daydreams of Jeremie Aliadiere running riot at Highbury.