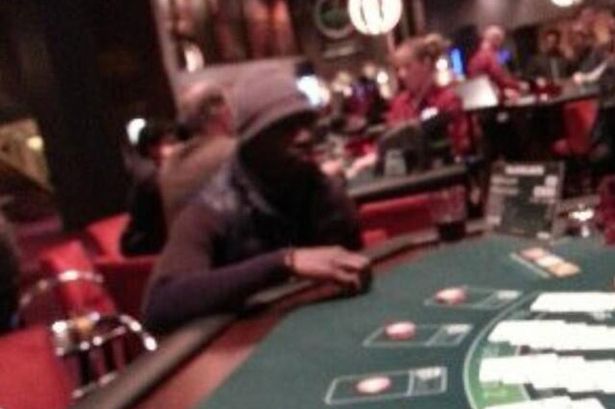 Having steadfastly refused to wear Newcastle United’s new kit because the sponsor clashes with his religious beliefs, Papiss Cisse has gone and undone all his hard moral crusading work by (allegedly at time of writing) being photographed gambling away in a casino in the city.

Cisse stated that he was unable to wear the logo of payday loan vultures Wonga due to the company’s business model contravening his strict Muslim beliefs (charging interest on loans is considered unethical in Muslim circles), with the Senegalese striker pulling out of the club’s pre-season tour of Portugal after being refused permission to play in an unbranded strip.

Sadly for him, gambling is held in similar stead when it comes to the laws of Islam, and a photograph of Cisse frittering away chips at the blackjack table in Newcastle’s Aspers Casino has since emerged online.

The photo dates back to last November, and was taken and posted on Facebook by Newcastle fan Andrew McNally, who told the Chronicle:

“People are going mad and you can see why. Cisse was just placing small bets, £10 or £20 with £5 chits. A number of fans have said that they have seen him in there.

“You have to say it does undermine his stance on Wonga. It seems to me that he wants a move away because a moneybags club have come in for him in Russia, Anzhi, and he now feels he can make more money there. That is certainly what many of the fans think.”

A spokesperson for Aspers Casino has described Cisse as “an occasional visitor” (apparently he organised a couple of charity events there too) who was “very well behaved and very welcome”, but would not confirm whether or not the striker actually placed any bets.

For what it’s worth, Madou Diene, Cisse’s agent, said: “Papiss Cisse is not a gambler.” Oh well, that’s that then.

How ironic that Cisse’s refusal to wear Wonga’s logo has raised so much interest in him, eh? Using rudimentary mathematics, we’d estimate that the interest in the striker has been raised by about 5,853% since this all blew up last month.