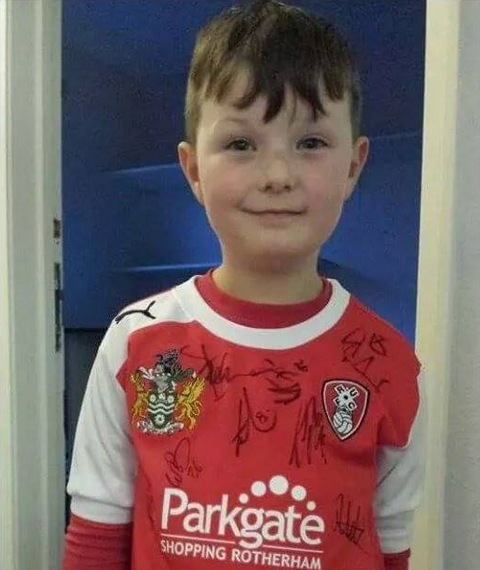 Jasper and his beloved Rotherham shirt

The parents of five-year-old Rotherham fan Jasper Thornton have launched an appeal to help recover their son’s prized possession, his signed Rotheram shirt, after thieves stole it.

Jasper, who suffers from a rare dermatological condition which causes painful blisters on his skin, had his beloved Millers shirt nicked when his dad had his car broken into on January 2nd.

Posting a plea for his son’s shirt to be returned on Facebook, Jasper’s dad Scott wrote:

“Our son has a rare medical condition ( Epidermolysis Bullosa ), meaning he will never play proper football.

“Supporting RUFC is as close as he will get and hes devestated as he got it signed during the promotion open top tour.

“If anyone sees one for sale etc please can you privately inbox me.

“Police are checking cctv that we have and have leads.

“Everything will be treated confidentially, we just want it back. Many thanks.”

The latest news is that, while, South Yorkshire Police are investigating the incident, Rotherham themselves have stepped in to aid Jasper’s plight by offering the youngster the chance to be a mascot at an upcoming game.

The Millers have also offered to present Jasper with a brand new home shirt which will be signed by all the players before the aforementioned game, to help tide him over until his old shirt is (hopefully) returned.

Jasper’s mum, Jessica, have told ITV News that she and husband Scott were “delighted” and that Jasper was “over the moon” with the gesture of goodwill.