Bayern Munich are currently stinking up the joint over in the Bundesliga with a distinctly drab start to the season leaving them down in fifth, nine points behind leaders Borussia Dortmund.

However, rather than uninspiring coaching or the possession of an ageing squad reaching the end of its natural cycle, it’s been decided by committee that the colour of Bayern’s new kit is to blame for their woes.

Indeed, the Bavarian club have more or less been forced into announcing that never again will the colour blue feature predominantly on their home strip after facing a revolt from the terraces.

Bayern’s Ultras are livid that the 2018-19 kit, particularly the shorts, are blue – the colour of the club’s despised cross-town rivals 1860 Munich. There have also been grumblings that the minty green away kit and mauve-y purple third kit do nothing to represent the club’s proud heritage.

There were even protest banners unfurled at a recent match that read “Our colours are red and white. We want red and white shirts”… 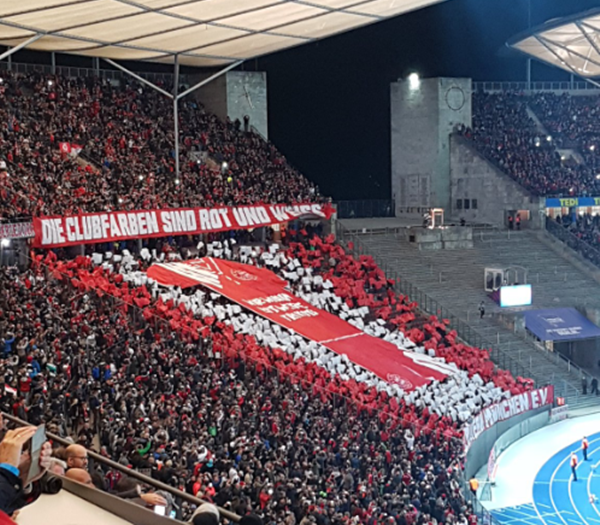 Bayern organised a meeting with said Ultras group to discuss their grievances and have since bowed, with the club’s director Jorg Wacker confirming via a statement that all future home kits will be solely red and white as a result:

FC Bayern has been in conversation with fan representatives about the use of club colours in kits.

For fans, kits represent an important sign of identity with their club.

FC Bayern has thus announced that in future, only the club’s traditional colours of red and white will be used in official match clothing – that is the home kit comprising shirt, shorts and socks.

So that’s ‘red and white’ and ‘white and red’ strips for the rest of eternity. How spectacularly dull.

Would it be churlish to point out at this juncture that blue features fairly heavily in Bayern’s storied club crest and has done since 1923, and that Bayern have also featured blue trim on their kits in several of their most successful seasons?

All a bit sad really, isn’t it? What happened to variety being the spice of life?