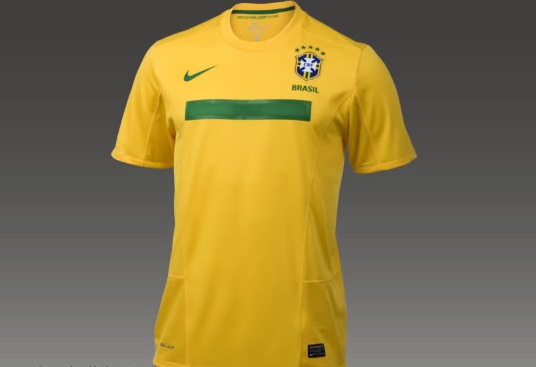 Here’s a leaked pic of Brazil’s new Nike home shirt (Via Football Shirt Culture), which the South Americans will wear against France in a Nike-approved friendly on 9th February 2011 (as we told you a couple of weeks ago, that’s also when the French will debut their ridonkulously expensive new Nike uniform).

First impression? Well it’s lovely and yellow and ‘Brazily’, plus the crewneck collar is retro-smart, but the designers have fallen headfirst into the classic ‘this just needs one more flourish’ trap, by adding a gratuitous green strip on the chest, at nipple height (unless you’re Ronaldo, in which case the strip is way above nipple height). This shirt doesn’t need it, but then I guess these days when you bring out new kits all the time, you need to be able to distinguish the latest model from its predecessors. Shame, as there is a nice kit lurking beneath that green bar.