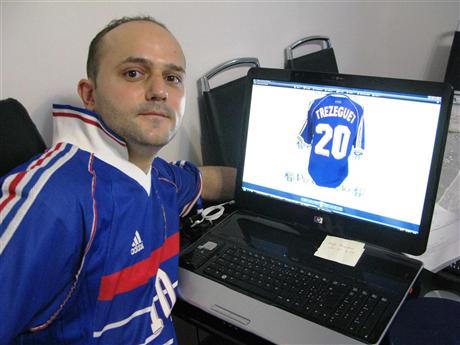 Thanks to the hyper-sensitive times in which we live, the shirt worn by striker David Trezeguet during France’s 1998 World Cup win over Brazil has been destroyed by airport officials.

Les Bleus fan Olivier Demolis bought the shirt off eBay for over £6,000 (€7,350 to be precise), only for customs workers to burn the shirt to cinders on it’s arrival in France after mistaking it for a counterfeit knock-off, due to a stretch of dodgy-looking stitching.

“It was a well-known seller and the jersey was official. It was the last piece in my collection.

“I was prepared to pay so much because those French jerseys from 98 are very hard to come across. There are only six in circulation: a ‘Zidane’, a ‘Trezeguet’, a ‘Desailly’, a ‘Boghossian’ and two ‘Guivarc’hs’.

When I went to get it they told me the shirt had been destroyed by customs because it was counterfeit. I went mad.”

I should coco, but at least he’ll be able to dry his tears on one of the other classic France shirts he has in his collection, which includes two valuable numbers stained by the sweat of the great Zinedine Zidane himself.