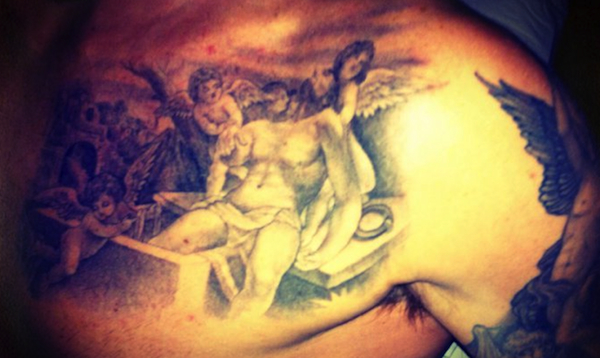 Back at LA Galaxy after his brief, off-season dalliance with Tottenham, David Beckham has taken to his Facebook account to show the world his new(ish) ink – a 12-hour tattoo etched across his chest that depicts Jesus being lifted from his tomb by three cherubs.

Beckham claims that the wee cherubs are representative of his three sprogs, Brooklyn, Romeo and Cruz, and that the big man himself is an allegory for, well…David Beckham:

“Obviously, the cherubs are boys, so my thought of it is, you know, at some point, my boys are going to need to look after me, and that’s what they’re doing in the picture. Everything has a meaning that I’ve got on me.”

For kicks, here’s the full interview that Becks posted along with the pics…