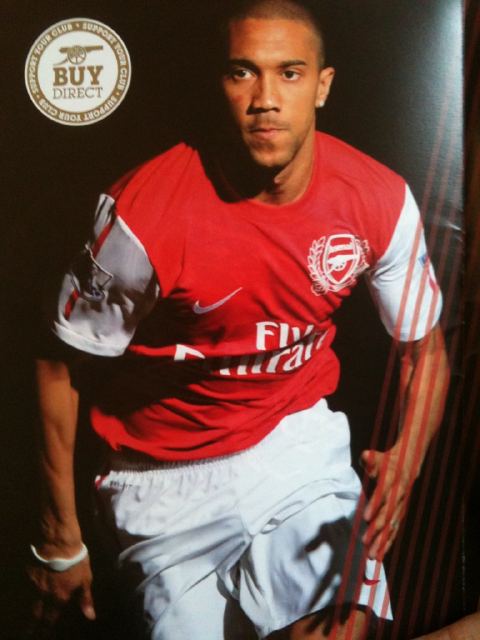 This is Arsenal’s (leaked) 125th anniversary home kit, as worn by an onrushing Gael Clichy. It’s fairly standard issue, apart from the crest, which you will notice is surrounded by laurel leaves. Why? Arsenal blog Le Grove has the skinny:

“It has 15 laurel leaves to the left side of the Club’s crest, reflecting the design detail on the reverse of the six pence pieces paid by 15 men to establish the Club – the laurel leaves also represent strength.

“The 15 oak leaves to the right of the Club’s crest give a nod to the founders who would meet in the Royal Oak pub.

“Underneath the crest is one of the first recorded mottos related to armament and battle – Forward.”

There you go. Forward – but still without trophies? Once again a sports company looks to the past to find new ways to fleece you, new ways to redesign the wheel, new ways to package bullshit. That said, you can’t argue with the basic Arsenal home kit, which of course is a design classic. This is no better or worse than any other.