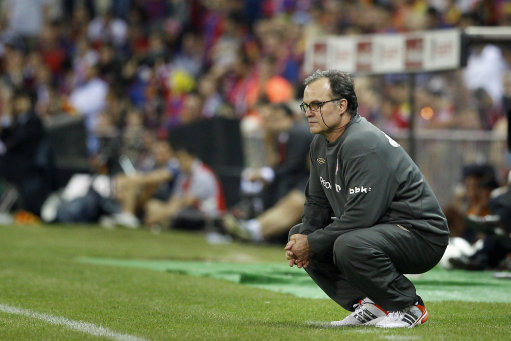 Bielsa: Prone and ready to destroy your world

Athletic Bilbao coach Marcelo Bielsa became embroiled in a ‘physical altercation’ with the site manager of a building company after his players were forced to train on a half-finished construction site on their first day of pre-season.

Incensed by the fact that the renovation being carried out at Bilbao’s Lezama complex had not been completed on time or to a satisfactory standard, Bielsa reportedly hunted down and then tore several strips off the supervisor before a scuffle broke out between the two men.

Bielsa, who has recently signed a new contract extension as Los Leones after leading them to both the Copa Del Rey and Europa League final last season, then called a press conference to non-apologise for his conduct – also hinting that the supervisor and his firm had chosen not to press charges because they didn’t want to draw attention to their shoddy work:

“The condition of Lezama is an insult to the players and I am responsible for them. I was indignant because that was not recognised and began to say offensive things. I don’t respect him because he did a bad job.

“I behaved badly and I admit that. I offended the person but [the site manager] also said some bad things. He made no police report and that, I believe, is because of pressure from his company or Athletic, who wanted to avoid [any publicity over] what I’m reporting here.

“Doing our pre-season in these conditions at Lezama discredits me as a coach. The work had deadlines. I had no vacation and I met with them a week ago and also spoke with those responsible for about four hours a day while in Argentina.

“One of the deadlines was on July 2nd and I was told that only half of the work would be completed. But it is not that the work wasn’t completed; it’s that it was done badly, in the knowledge that it was being done wrong.

“When I saw that, I got angry because I have a squad here that is worth €300 million that has to work in these conditions.”

The man is 100% all-in, you’ve got to give him that. Indeed, there are few more dedicated to the cause than Marco Bielsa. If fighting builders is what it takes, then he’ll bloody well fight builders for you!