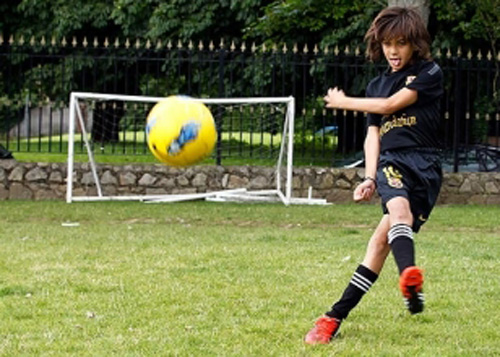 Photo courtesy of The Sun

Nine-year-old Zak Gilsenan from Castleknock in Dublin could, one day, follow in the footsteps of Dublin-born footballing greats such as Liam Brady, Johnny Giles and er, Glenn Whelan, after signing on the dotted line for La Liga giants Barcelona.

The youngster shone in midfield in a trial with the Blaugrana back in May and will now move to sunny Spain with his family in tow, where he’ll take his place at the famous FCBEscola football academy. Dad Stephan explains:

“We were living in Australia when Zak was spotted by Spurs, who were running football camps over there.  We came home with the intention of letting Zak go to Spurs, but in the meantime we had a call from Barcelona. One of their former players saw him playing in Oz and recommended him to Barca.”

“They offered Zak a trial in May and it was a great experience. It consisted of over 400 boys from all over the world. He was asked back in June when it was cut down to 90.”

“Then in a match between the top 16 players, Zak just ran riot and scored seven goals. He was phenomenal. Then we heard back two weeks ago and they offered him a spot.”

So there you have it – the (somewhat distant) future for the Boys in Green may involve more tika-taka and less hoofy-hoofy. Oh, and when you add in young John Joe Patrick Finn, another nine-year-old who was signed by Real Madrid back in May, the future is even greener!

On a personal note, having grown up just down the road from Castleknock, it somewhat irks me that Barca never came across my outstanding left-wing skills as a kid. Their loss, I guess.