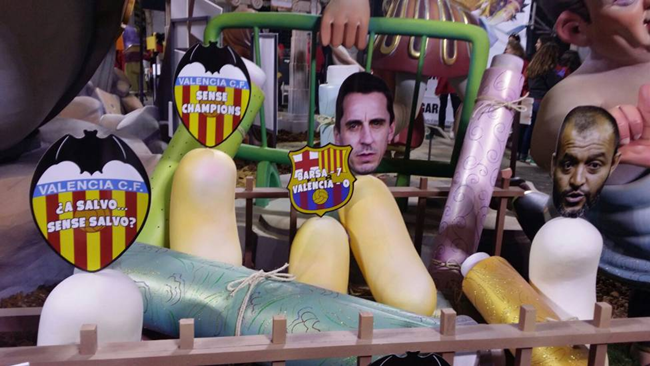 A ninot with Gary Neville’s face attached, shortly before being burned to a cinder (Photo: AS)

Suffice to say that things haven’t gone particularly well for Gary Neville at Valencia over the past few months, his idling side now perched just six points above the relegation zone after slumping to defeats in their last three La Liga outings.

Indeed, things are now so desperate that Valencia fans have been burning effigies of their beleaguered coach in the street.

Technically, it was part of the famous ‘Las Fallas’ celebrations that are held in Valencia in March of year, but something tells us Los Che fans might have been burning Neville’s likeness regardless of when the city’s famous week-long fire festival fell this year.

Every year, guys of several famous rogues are burned to cinders in the streets, the idea being that hopefully something better rises from the ashes.

Front and centre were Spanish president Mariano Rajoy and Pope Francis, but several smaller ‘ninot’ figurines were reserved for the entire Valencia hierarchy, with Neville, owner Peter Lim, chairwoman Layhoon Chan and previous coach Nuno all being offered up to the gods.

Hang on in there Gary baby, only two more months to go.