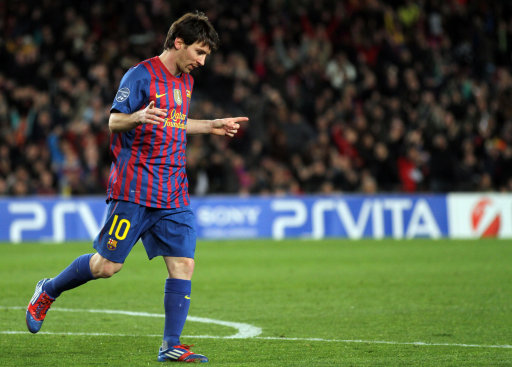 Five goals for the first time ever in a Champions League game (beating his own jointly-held record of four), seven goals off the top of the all-time Champions League scorers chart at the age of 24, 48 goals in 42 games this season (with 20 assists), 53 goals in 49 games for club and country, a total of 228 goals in 311 appearances for Barcelona (including 186 in his last 201 games), five Spanish league titles, three Champions League titles, an Olympic gold medal and individual awards up to his armpits.

Surely there can be no criticism of Lionel Messi? Wrong. The footballing world apparently needs analysis and scepticism, no matter how completely and utterly arbitrary it may be…

1. “He’s only breaking records because he plays in a great team.” – Partially true of course, Messi is joined on the pitch (and on his ‘wavelength’) by the likes of Xavi, Fabregas, Iniesta, etc, which can only ever be beneficial – though it can’t be glossed over that it’s Messi alone who’s breaking all the individual scoring records and winning three Ballon d’Ors on the spin. Hardly an anomaly.

However, our main gripe with this line of thinking is that it’s usually trotted out to extol the virtuoso virtues of the apparently solo Cristiano Ronaldo, who has to get by with the measly supporting cast that makes up Real Madrid’s bereft squad. Both players are fantastic and both play in fabulous sides.

2. “He’d struggle in the Premier League/cold, wet Tuesday night in Stoke, yadda yadda yadda…” – The logic seems to be that, due to the more physically intense defensive aspect of top flight English footbal, Messi would be starved of the space he needs to flourish. Firstly, need we remind you that Premier League defences tend to consist of the likes of Zat Knight and, secondly, La Liga has it’s fair share of Pepes and, thirdly, it’s fair to say that Messi could dribble a ball blindfolded through Piccadilly Station at rush hour without upsetting anyone’s lukewarm coffee. We reckon he’d probably be alright. Good for 10-15 goals a season at least!

3. “He’s off form.” – Last October, when Messi failed to score in three consecutive Barcelona games against Viktoria Plzen, Sevilla and Granada, the press jumped on him. ‘What’s wrong with Leo?’ they brayed in unison. He then scored a 15-minute hat-trick against Mallorca in the very next game – the point being that he has skewed perspective to the point where three games without a goal represents an all-pervading slump. Need we remind you, Fernando Torres has just passed the 24-hour mark without troubling the scoresheet. Messi hasn’t really been ‘off form’ since he got under way in 2008.

4. “He’s not Maradona!” – Nope. Neither is Carlton Palmer. Or the guy who invented paper clips…

5. “He’s better against the smaller clubs.” – ‘Footballer X puts in more convincing shift when playing against weaker opposition’. Not really an entirely shocking correlation, is it now? The exact same goes for every single footballer on the planet, the difference being that Messi also pootles along quite nicely in the odd Champions League final, El Clasico, etc.

6. “He’s incomplete, he’s no good with his head.” – Pele comes across as a bitter old sod at times, unable to accept his place in the history books as his legacy slowly but surely becomes ever-more redundant in the modern era. He’s been famously dismissive of fellow ‘Greatest Player of all Time’ nominee Diego Maradona ever since the comparisons began, and his reluctancy to allow anyone into the same bracket of greatness as him has now been extended to the latest pretender to the throne. The only fly in the ointment being that Messi is actually quite good with his head.

7. “He’s the square root of shite when he plays for Argentina.” –  Messi has won everything worth winning as a domestic entity and been largely criticised to failing to piggyback Argentina to similar glory over the years. Now, Argentina aren’t geared up to play like Barca and, as such, he’ll probably never win the World Cup, but 22 goals in the space of 67 caps ain’t too shabby.

Any more ridiculous, unwarranted criticisms of Messi you’d like to address? Tell us all about it…