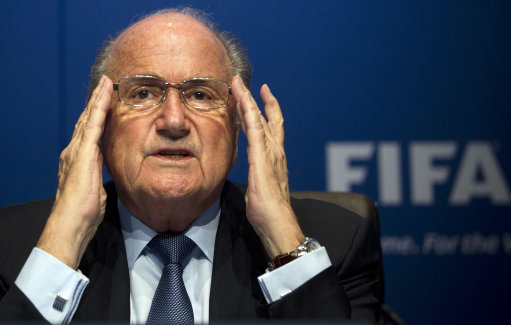 FIFA dumpling Sepp Blatter has hinted this morning that he and his minions are looking at alternative methods to decide games after the inhumane cruelty of penalty shootouts caused him to wake up screaming in a cold sweat, leaving him needing a few hours in his onyx meditation chamber to stop the palpitations.

“Perhaps the ‘Football Task Force 2014’ group (who recommend rule changes to FIFA) can show us a solution, perhaps not today but in the future.”

The head of this task force? Franz Beckenbauer, honorary president of Bayern Munich, who lost the Champions League on penalties last weekend. It’s just a coincidence we’re sure.

Anyway, it got our juices flowing and after we’d mopped them up, we began brainstorming. Beating Beckenbauer’s justice league to the punch, here are Pies’ six proposed alternative to the penalty shootout…

1. FIFA Ex-Co Fight to the Death: Each side gets to select one of FIFA’s executive commitee from a brochure as their representative in a fight to the death on the pitch. The floodlights are dimmed as both members are driven blindfolded onto the pitch, with the two cars taking their place in an unescapable ring of vehicles formed around the centre-spot. The doors are then unlocked remotely and the two fight to the death while crude weaponry (lead pipes, nailed planks, hammers) is thrown in from outside. Winner is the last man standing. Our money’s on Tokyo the Sexwhale.

2. Penalties remain, but Sepp has to take them all: 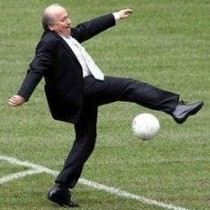 4. Reality show: After 90 minutes, a player from each side is allowed to come forward, to perform an insipid version of Mariah Carey’s ‘Hero’ or some terrible crap from a Lloyd-Webber musical. A giant chair then swivels around in one of the executive boxes and we have Jessie J critiquing the vocal performances despite the obvious irony, before the phone lines are opened to the public. Best ‘all my immediate family are dead’ sob story wins – just like in real life! (Maybe a cooking element could also be included to snare that all-important 25-45 female demographic?)

5. Have a little pow-wow with Budweiser: Extra-time Multiball. Must. Happen…

6. Unmarked manilla envelopes: As is the case with standard FIFA protocol, both sides place a cheque for a specified amount inside a brown envelope in a blind auction at full-time, with the highest bidder taking the spoils – the ‘Qatar Method’ as it’s known in the trade. An added incentive being that FIFA would also be able to buddy up with Coca Cola (other multi-national soft drinks conglomerates are available) as their ‘official envelope opening partner’ and stage a stupidly decadent 30-minute ‘envelope opening ceremony’ with 1,000 dancing moose all wearing blue cellophane visors and silver romper suits. Win/win.