Apropos of nothing in particular though partly inspired by No.5 on this list, we thought we’d compile a completely ill-timed Top 10 of football’s most infamous bitey buggers… 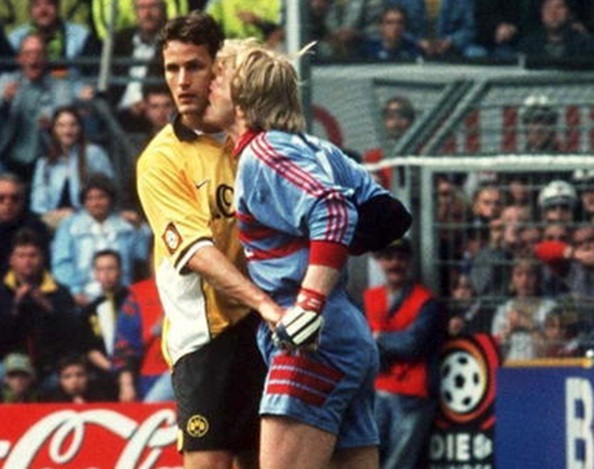 While not a fully-fledged bite per se, Genghis Kahn once tenderly nuzzled Dortmund forward Heiko Herrlich’s neck during a Bundesliga game in 1999.

Incidentally, the 2-2 draw was also the same game in which Kahn came perilously close to hobbling Dortmund striker Stephane Chapuisat with a flying kung-fu kick to the kidneys “just to get rid of some built-up pressure”…

Obviously, he must have been referring to Chapuisat’s blood pressure.

We’re not sure it technically counts as a bite if you’ve got no teeth, but England midfield terrier Stiles is said to have gummed at least one West Germany player during the 1966 World Cup Final.

After being felled by a forceful Javier Mascherano challenge in 2006, Tottenham striker Jermain Defoe threw a minor strop which culminated in what his manager Martin Jol later referred to as a “comical nibble” on the upper arm of West Ham midfielder.

In keeping with his general ‘little shit’ demeanour, Chelsea midfielder Wise narrowly escaped UEFA punishment in 1999 after nipping Real Mallorca centre-back Marcelino on the hand during the Cup-Winners’ Cup semi-final at Stamford Bridge.

UEFA tried to bring a charge against Wise but eventually had to let him off after finding that cannibalism wasn’t covered in their disciplinary regulations.

Instead they just tut-tutted about the “unsporting gesture” in a statement.

In 1995, mere hours after England’s tempestuous clash against the Republic of Ireland at Lansdowne Road had been postponed due to crowd violence and rioting, Daily Mirror journalist Ted Oliver had the misfortune of bumping into a…shall we say… “well-greased” Jones in the foyer of a hotel just around the corner.

Oliver was introudced to Jones by the FA representative he had been chatting to, only for the lairy Wimbledon hardnut to promptly lean in and bite him in the face – reportedly clamping his teeth around Oliver’s nose and then shaking his head.

With blood beading up in the teeth marks, Jones then laughed “I always do that to people!” before merrily continuing on his way.

Oliver, who sadly passed away in 2007, duly published a full report (including photos) in the Mirror the very next day. 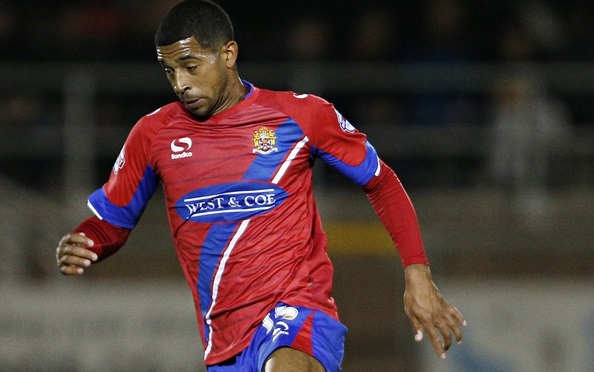 As of this very morning, the Dagenham midfielder has now had two FA biting charges levelled at him in the space of a year.

The first incident saw Labadie, then of Torquay, found guilty of biting not one but two Chesterfield players during a League Two game last season – leading one of his victims, midfielder Ollie Banks to exclaim on Twitter: “I can’t believe another human has taken a chunk out of me!”

Labadie was subsequently fined £2,000 and banned for 10 games, with Torquay releasing him immediately after his suspension was observed.

Skip forward 12 months and Labadie has been hit with a second biting charge after an alleged altercation during Dagenham’s recent trip to Stevenage.

Who can blame him? After all, we all know human meat is the sweetest meat.

Back in 2001, Sevilla forward Gallardo went a little O.T.T in celebrating strike partner Jose Antonio Reyes’ goal against Vallodolid when he hunkered down and playfully gave the former Arsenal man a nip on the giblets.

The Spanish Football Federation suspended and fined Gallardo for “violating sporting dignity and decorum”, but, as always, it was the victim who was left to bear the emotional burden.

“The worst thing about it is the teasing,” lamented a teary-eyed Reyes, who swiftly went into hiding and hasn’t been seen or heard from since.

3. Gianmario Comi (aka ‘The Vampire of Serie B’) 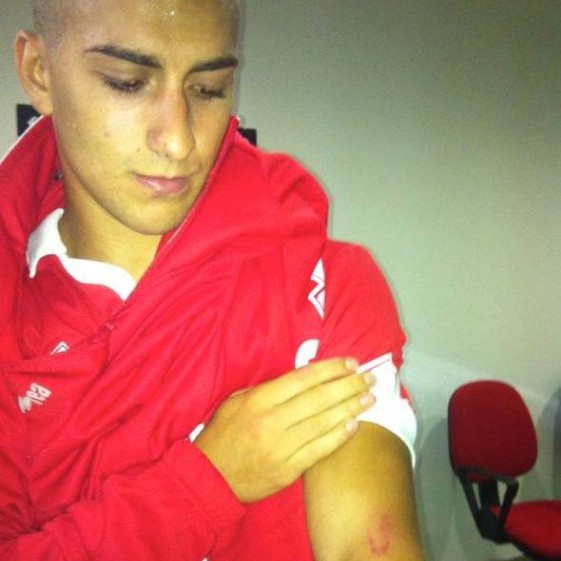 Let’s face it, you don’t go around earning yourself nicknames like that by accident.

Last season, Avellino striker Comi was alleged to have clamped down on Bari winger Guiseppe de Luca’s bicep while the pair tussled during the formation of a defensive wall.

While De Luca was undoubtedly the instigator of the skirmish, he also appeared to come off the worse – with Bari posting a photo of his bite wound on their official club website after the match.

What’s worse, De Luca was actually red-carded for his part in the incident. The Vampire, however, not only escaped without punishment but also went on to score the equaliser in a game Avellino eventually went on to win.

Of course. Three high-profile gnashes and counting, though Suarez’s triptych of denticular transgressions almost pale into insignificance in the wake of the tenth and final monster on this list!

Without doubt the most savage creature ever to (dis)grace a football pitch must surely be the pine marten that ran amok during the Swiss Super League game between FC Thun and FC Zurich in 2013.