Wrestling and football don’t have a whole lot in common. One is classified as “sports entertainment” and littered with OTT characters churning through increasingly farcical narrative arcs. The other just involves two undressed blokes fondling each other.

That said, there is a level of mutual appreciation between the two worlds. Jose Mourinho and Wayne Rooney, for example, have both been spotted at live wrestling events under the flimsy guise that they were there with the kids.

On the other side of the divide, there are plenty of football-loving wrestlers too, as this beefy XI duly demonstrates… 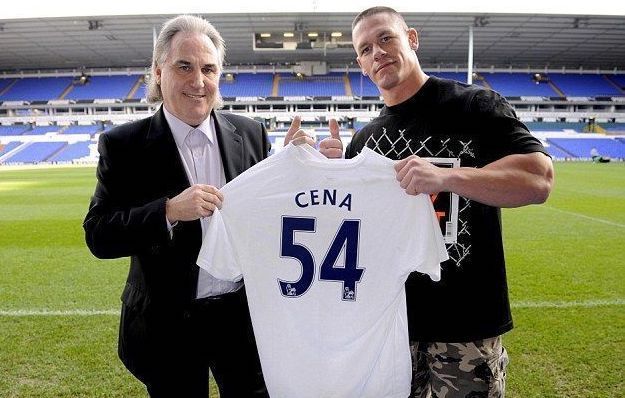 Big JC first fell in love with Tottenham after being invited to White Hart Lane in 2008 during a visit to the UK.

“I got to hear about the Spurs being the working man’s team, I got to meet the coach and it was beautiful to see the bright green pitch amidst all the city concrete,” he said.

“So, I was taken aback by the passion of the sport – although I never got to see them play.”

Gerry Francis has never looked more in his element.

Adrian (no relation to Gary or Phil) Neville, was born and raised in Newcastle, which puts his level of fandom above most of the names on this list. Not that he’s the most optimistic of supporters.

Asked about the Toon’s promotion hopes under Rafa Benitez during the 2016/17 campaign, Neville responded “while they’re in a good position now, knowing what they’re like they’re probably going to throw it all away.”

The Heartbreak Kid must have experienced his fair share of pain as a Rovers fan. Interviewed by Sky Sports before the club’s trip to West Ham back in April of 1995, Michaels revealed himself to be a fan of “the Blackburn Rovers” thanks to a distant relative.

He had some words of wisdom for Rovers too as they closed in on a Premier League title: “Do whatever you have to do to win, that’s what I do.”

You can’t say it didn’t work. 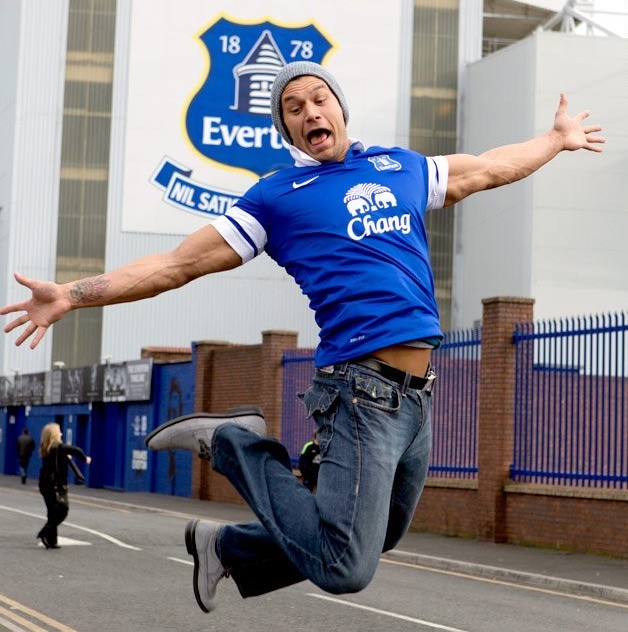 The WWE’s resident salsa dancer struck up a special relationship with the Toffees after the Merseyside club began playing his theme tune at games – at the wrestler’s request on Twitter.

“We had a little bit of a back and forth but eventually they played it at a game and now I am a huge Everton fan.”

The Texas Rattlesnake became a Bolton Wanderers fan after drawing the club’s name from a hat on the hit show Soccer AM.

He’s continued to interact with fans of the Trotters ever since and wished them luck ahead of a Tottenham game back 2009.

He may not be the most dedicated of supporters but Bolton fans have been buzzing ever since. 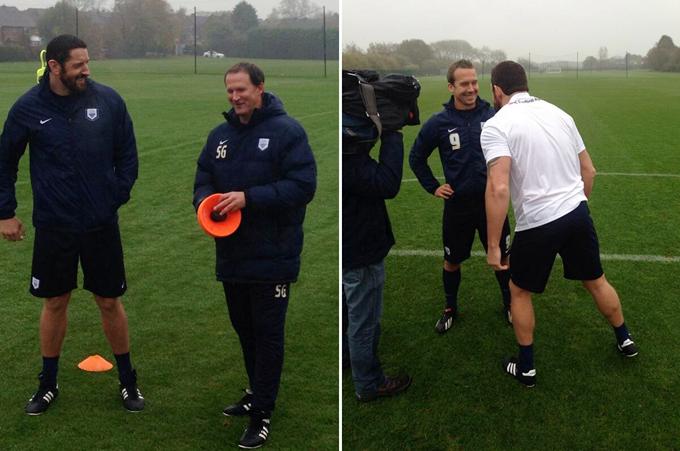 Another of WWE’s newly-installed English contingent, Barrett is arguably the biggest actual football fan in wrestling and is a firm supporter of his home town team.

“I don’t get the chance to visit friends, let alone go to a football game [when in the UK] . Fortunately my dad’s a huge fan too and he sends me reports on the matches, so I’m fairly up to speed.”

Barrett even trained with Preston a couple of years ago after getting into a lighthearted Twitter feud with then-coach Kevin Davies and, somewhat bizarrely, Wayne Rooney. 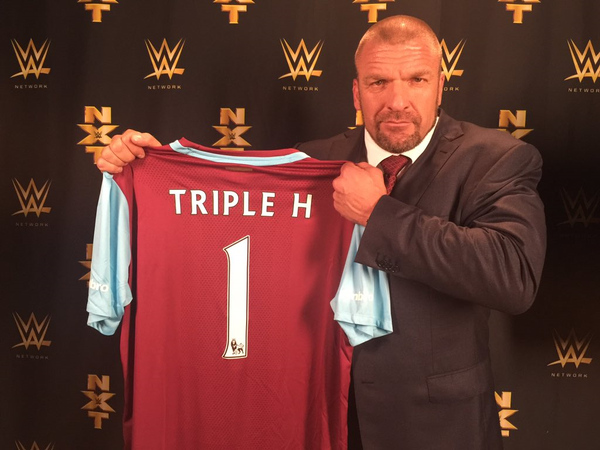 The Game has been forever blowing bubbles ever since ITV News quizzed him on his choice of Premier League team ahead of a WWE event at Wembley.

Given the rugged manner in which captain Mark Noble dealt with a pitch invader recently, it’s difficult to disagree with that assessment. 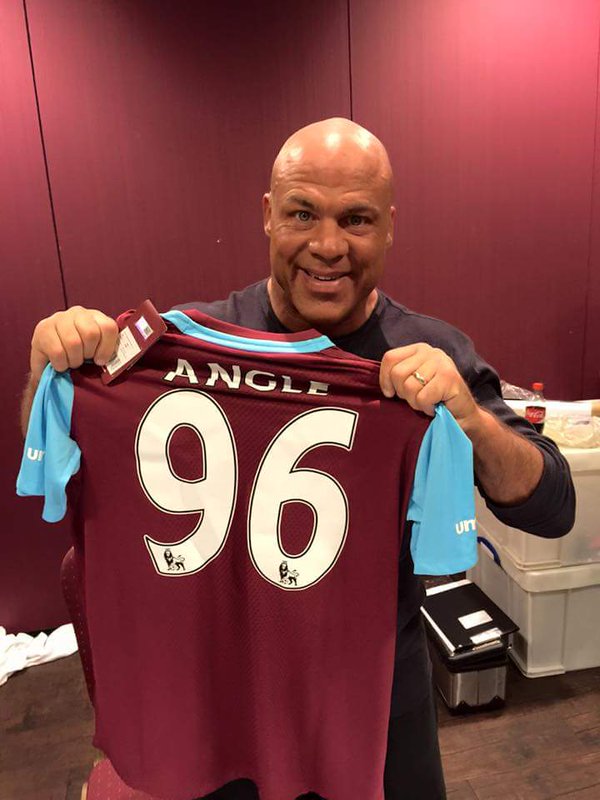 Honestly, other than this photo, there doesn’t seem to be much more evidence that Angle – the man who won Olympic gold with a broken freakin’ neck – even knows what a ‘West Ham’ is, let alone supporting them devoutly.

If only for his mental well-being, we’d suggest he’s better off keeping it that way. 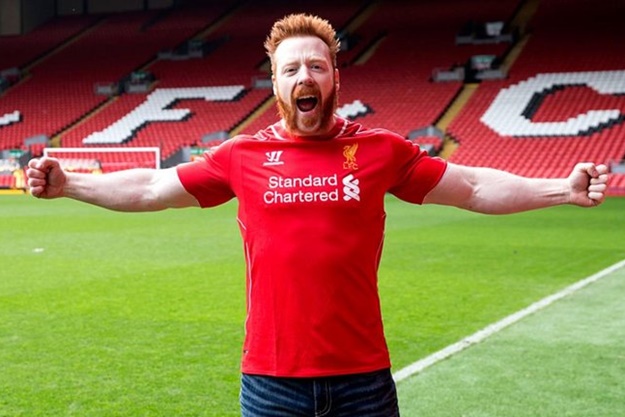 The Dublin-born grappler is a big Liverpool fan and seems to know his stuff. Asked by Sky Sports to rate the Reds’ chances earlier this season, Sheamus tipped Manchester United and City to excel, while also expressing concern over Dejan Lovren.

“We haven’t strengthened the defence at all, which is what we needed after last season,” he said.

Was that the moment Jurgen Klopp decided to spend big on Virgil Van Dijk? Probably not.

Just like Stone Cold, The Rock appeared on Soccer AM in 2008 and was asked to pick a team out of the hat to throw his considerable weight behind.

Alas, Mr Johnson hasn’t found time to toddle down to Moss Rose to smell what’s cookin’ as yet, though he’s probably busy being the highest paid movie star in the world and all.

The Nature Boy revealed himself as a Leicester fan in a surprise appearance on BBC Radio Five Live in 2016, during which he gave the Foxes a pep talk ahead of their title run-in, while also throwing serious shade on Manchester United.

“Boys, I heard it’s one in 500 million, that’s the odds of you guys winning,” Naitch yelled. “You’ve come this close, you’ve walked that aisle, you’ve played and beaten the best.”

“Bring it. Don’t look back, just look forward. Manchester United—you’ve got no game. Leicester City all the way.”

Just a few months later, the Foxes were champions of all England.