‘He’s got good touch for a big man’ is one of Pies’ favourite football cliches. These ten players, listed in no particular order, prove that not all 6-footers are lumbering oafs.
1. Emmanuel Adebayor (6ft 3in)
The unsettled Arsenal striker has excellent feet, as he shows here:

Shame about his mental strength, some might say.
2. Marouane Fellaini (6ft 5in)
Is Screech really that tall? That’s what the internet says anyway. I suspect he is actually 5ft 11in but with a six-inch Afro. Which is cheating, sort of.
3. JosÃ© Torres (6ft 4in / 6ft 8in) 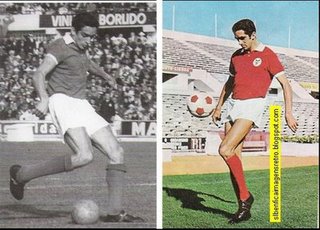 An article on FIFA.com claims Torres (pictured above) is 6ft 4in, whereas Wiki has him at a giant 6ft 8in. Whichever is true, JosÃ© was known in his playing days as ‘O Bom Gigante’ (‘The Good Giant’) and he played alongside Eusebio in Portugal’s national team, so it’s safe to say he qualifies comfortably for this list.
4. Jan Koller (6ft 7in)
The huge Czech striker is great in the air, as you’d expect, but he’s also very tidy on the floor. If I had a pound for every time I’d heard Koller referred to as a player who has ‘good touch for a big man’, I’d probably have about eight pounds.
5. Zlatan Ibrahimovic (6ft 3in)
In terms of skill-to-height ratio, Zlatan has to rank as the most skilful player in the world. How many six-footers do you know who can do this:

Always a pleasure to watch that.
6. Paulo Wanchope (6ft 4in)
Wanchope’s legs were never connected to his brain, but sometimes everything would come together to create football magic…

Des! And a young Alan Hansen looking a lot like Captain Scarlet crossed with Alan Partridge.
7. Nwankwo Kanu (6ft 5in)
Kanu is the sort of player who you know would destroy you in a five-a-side game…

Flicking awesome.
8. Ralf Edstrom (6ft 3in)
Swedish striker who starred for his country at the 1974 World Cup. This goal against Uruguay was his finest moment at that tournament:

Of course there is a place for CrouchinhoÂ – when you think of footballers with good touch, Peter’s angular head pops into your mind. He is truly the lanky master of the unlikely scissor kick.
10. Yang Changpeng (6ft 9in)

Yes, that is a full-sized goal. Football’s Yao Ming plays for the brilliantly named Three Gorges Kangtian in his native China. Sam Allardyce once had Yang on trial at Bolton. Big Sam said of the player: “Like Crouchie, Yang is not just a handful in the air. He’s very skilful with the ball at his feet.” Yang claims his favourite player is…Â Peter Crouch.
The tall footballers XI