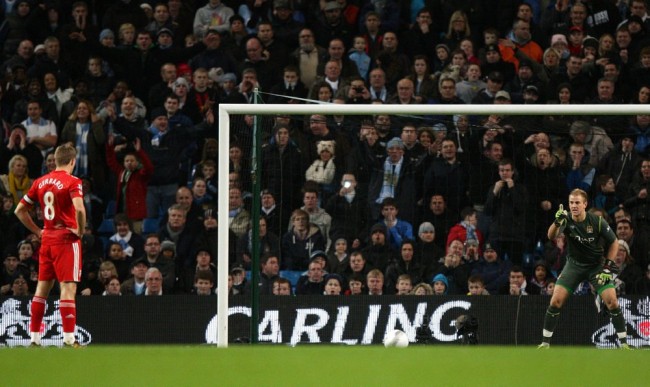 “You got once chance, mon frere!”

It was a bit of a strange, suffocating old game but, thanks principally to Kenny Dalglish switching to a flat-back nine for the majority of the second-half, Liverpool came away from the Etihad with the slimmest of advantages (City’s first back-to-back home defeat since February 2008) to take back to Anfield for the second leg.

Steven Gerrard scored the only goal of the game from the penalty spot, after the decidedly ropey-looking Stefan Savic – Vincent Kompany’s junior stand-in – jammed his studs into Dan Agger’s knee on the 13-minute mark.

City saw a riled and frustrated Mario Balotelli mope off straight down the tunnel after being substituted eight minutes before half-time (what was up there? Hissy fit/injury flare-up?), before the second-half bought 45-odd more minutes of empty, Marie Celeste-style possession from the home side while Liverpool’s nine-man defensive regiment coagulated around Reina’s goal and kept the enemy at bay without breaking a sweat. It may have been dour to the Nth degree, but it worked.

As an aside, just how much did City miss David Silva’s link play? ‘A whole damn heck of a lot’ is the correct answer.

Oh, and Roberto Mancini and Steven Gerrard ‘clashed’ over something in the tunnel after the game. Something tells us it could have been this, though maybe the man in charge of the Etihad PA system refused to play any Phil Collins. You know what Stevie gets like when they won’t play his favourites.