Aside from the 17 ejections, two arrests and the fact that, almost entirely in unison, Anfield saw fit to boo a victim of racial abuse at the hand’s of one of their own players for the entire game – the atmosphere at today’s FA Cup tie between Liverpool and Manchester United was just about as placid and tolerant as it was ever likely to be.

Except for this brainless f**kwit of course, who was caught on camera making a ‘monkey’ gesture at Patrice Evra at some point during the game – inferring, with an audacious lack of self-awareness and irony, that, of the two, it was the United left-back that wasn’t fully evolved from apes… 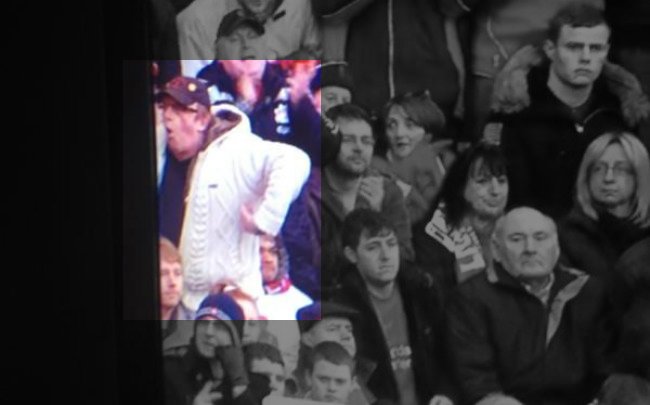 You’ll be glad to know that the police would now like a little word after the screen capture above was circulated on Twitter this afternoon. Indeed, Match Commander Chief Superintendent Jon Ward said thus:

“This matter is now under investigation by specialist hate crime detectives and we are working with Liverpool Football Club to identify the man in question.

“We take all forms of offensive behaviour seriously, and we will always thoroughly investigate such claims. We cannot allow this type of behaviour to affect the enjoyment of genuine fans.

“We will continue with our efforts to deal with the small number of individuals who commit offences at football matches, in particular, with the continued use of football-banning orders.”

Best of luck with that. Feel free to ban seven shades of shit out of him for my money.