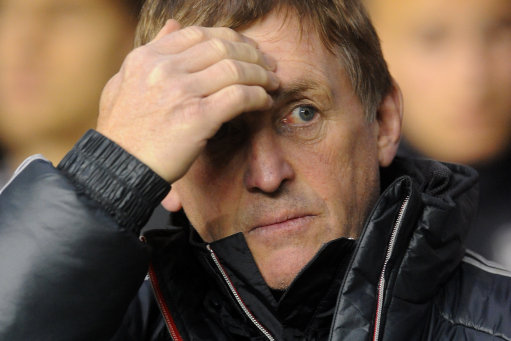 Ahead of Tuesday’s nights Merseyside derby which sees ninth-placed Everton attempt to leapfrog rivals Liverpool in the table with a victory, Liverpool boss Kenny Dalglish has spoken, rather bizarrely, about how the Reds’ off the pitch activities are just as important as the team’s performance in the Premier League. He said:

“The club is now where it was before – each one for each one, everybody in it together. There are many ways you can judge a season and the best way is progress at the football club as a whole. I don’t think it necessarily relates to trophies or points.”

“You can measure it by how the club has progressed and where it is, from the first team to the kids. Off the pitch, especially, the club is a lot stronger than what it was. You go off the pitch and see how much money we are getting through sponsorship and kit deals.”

“You look at the academy and see how much better it is. You look around here and most of the people have got a smile on their faces now. The squad is stronger than it was last year. What other areas are there to improve on – apart from points?”.

Fair enough, Kenny, all that business stuff is important – but after shelling out a load of cash on Andy Carroll, Stewart Downing, Jordan Henderson, Charlie Adam, Luis Suarez and Sebastian Coates amongst others, is being 10 points off a Champions League spot, winning only two of your last 11 league games and finding yourself just two points ahead of cash-strapped Everton really good enough? Sure the Reds did pick up the Carling Cup, but one wonders if Dalglish wasn’t such a worshipped Anfield icon, would he be given such an easy ride by the Liverpool faithful?