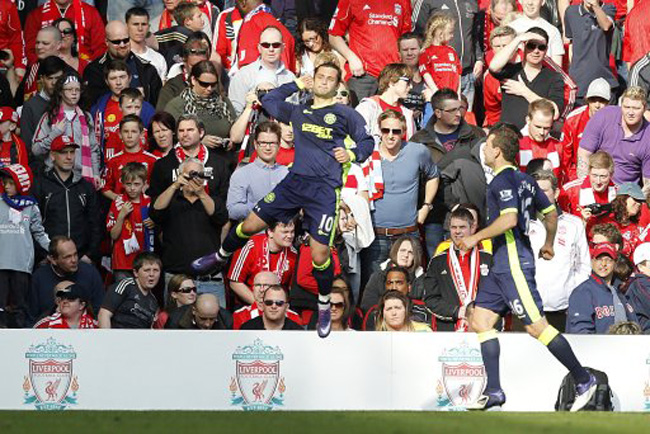 Roberto Martinez is one of the more likeable managers in football, and against a lacklustre Liverpool side on Saturday, he presided over a vital win for his struggling Wigan side.

The home side produced a flat perfomance throughout and went behind on the half-hour mark, when Shaun Maloney converted a spot-kick after Martin Skrtel fouled Victor Moses in the box. However, the Reds fought back and eventually pulled level early in the second half, courtesy of a classy Luis Suarez finish from a Steven Gerrard centre.

The Reds started to dominate and Suarez then thought he had scored again, only for ref Lee Mason to judge that the Uruguayan had bundled the ball over the Wigan line with his hands. However, soon after, the Reds were behind again, when defender Gary Caldwell turned superbly in the Liverpool box before calmly firing past Pepe Reina.

The home side tried to rally but struggled to construct any kind of proper comeback and ultimately finished the game on the losing side once again.

Kenny Dalghlish’s Liverpool have now lost five of their last six Premier League fixtures and will now do well to claim a Europa League place come the end of the season. Wigan, on the other hand, are now just a point from safety.