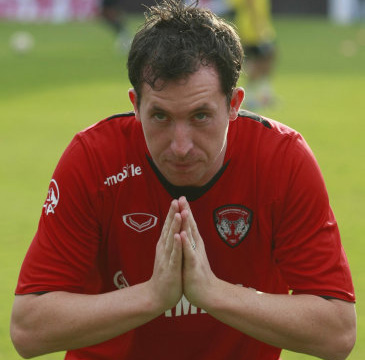 Man of the moment and Liverpool fan, Bradley Wiggins, has revealed that a text message from his Kop idol Robbie Fowler meant much more to him than a letter from the Queen.

“The wife was getting ecstatic the Queen had sent us a letter and I kept saying: ‘Forget the Queen.’ ‘Johnny Marr  has sent me a message on Twitter. And Robbie Fowler’. I had a message from God.”

“I had a message from Robbie on Wednesday. I don’t know him well, but he’s followed the Tour de France and to get a message from someone like that was great.”

“I said to Robbie, ‘You’re inspirational’ and he said, ‘You’re the inspiration, pal’. That’s a bit odd for me, as I idolise these people. I’m a Liverpool football fan and I’ve sat in the Kop many a time and watched those guys, so it’s really nice to hear them applauding me.”

The skinny superstar has also been getting messages from a certain Joey Barton, as the media whore does his best to jump aboard the Wiggo-wagon. Wiggins said (a bit less enthusiastically, to be honest):

“Joey Barton’s been sending me messages and the fact that cycling has reached those people is phenomenal really.”

I wonder if Man Utd fans will start hating on (as the kids say) Wiggins now?