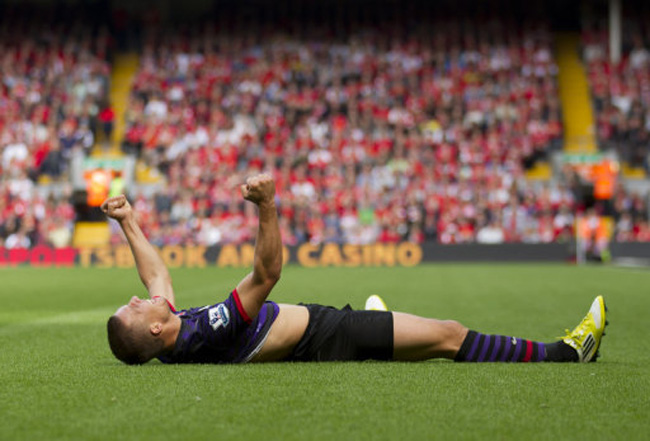 Three games played and three clean sheets will no doubt please Arsenal coach Steve Bould, as the Gunners once again produced a disciplined and defensively solid performance against Liverpool, this time with added goals too.

With Nuri Sahin making his debut in midfield, Brendan Rodgers’ Reds came into this game looking to give the home fans something to cheer about, but other then the odd run by Raheem Sterling (who did hit the post with a clever first-half effort) and Luis Suarez, Liverpool looked a side far from the finished article.

Arsenal, on the other hand, looked impressive, with Abou Diaby dominated the midfield and Lukas Podolski providing a muscular presence out wide. And it was the German who opened the scoring, firing home on 31 minutes after good work from Santi Cazorla (and after an error from Steven Gerrard).

Olivier Giroud should have doubled the score, only to waste a very decent chance. Still, Cazorla eventually made the game safe for the Gunners, firing home on 69 minutes. Although Pepe Reina will be disappointing with his attempt at a save.

So Arsenal, despite not strengthening the squad defensively during the transfer window, make it three clean sheets in their first three games (for the first time in 88 years!) as they continue to gel post RVP and Song.

And for Liverpool? The failure to adequately strengthen the squad in the final days of the transfer window could come back to haunt Rodgers and co.